As far as I can recall, I've had the Mule about seven years.  The choke cable has become quite stuck, which is problematic when you're trying to start it on a cold morning.  Also, the designers at the Kawasaki plant tried to make it easy to use the choke cable, but they routed it so that it's a huge pain to replace.  So, I started casting about for a quick fix.

On looking at the engine, I realized that the choke lever and cable points directly to a body panel.  A quick disassembly of the choke cable, a quick hole punched in that body panel, and a short section of mild steel rod, and I can pull the choke from the driver's seat.  After the engine is started simply releasing the loop in the  rod releases the choke, since it is spring operated.  Easy, peasy, about a half-hour job, including figuring out just exactly how I wanted to route the rod.  It may not be beautiful, but it's certainly simple and workable.


Here's a picture.  Sorry about the focus, it's getting darker, earlier. 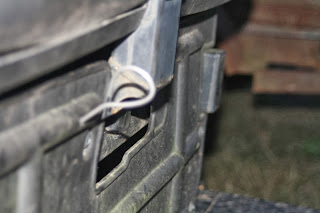 It ain't pretty, but it's darned sure workable.  When I grab that little ring and pull, the choke opens.  When I release it, the choke closes.  Now, maybe I can start it when it gets cold.  Until I can find a choke cable.
Posted by Pawpaw at 5:17 PM

Waddaya mean it ain't pretty, PawPaw? Looks gorgeous to me. If somethin' works, doesn't cost much, is easy to do, and is out of the way, it's pretty. If it was me, I'd leave it alone. Money not spent can be wisely invested in beer. Preferably Deschutes Brewery Black Butte Porter.

Works on golf carts to.

Great solution. I don't see that you gain anything by spending money to install the cable, unless you are going to sell the mule.