Part of the Christmas tradition is a ham or two, depending on the crowd that shows up to eat.  Normally, I cook a spiral-cut ham, but this year I was gifted two smallish hams that we cooked for Christmas Eve.  This morning I took the remains out of the fridge and worked on reducing them to a more manageable size. 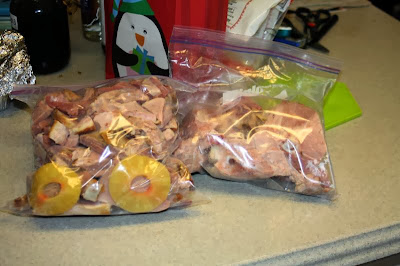 That bag on the left is almost a gallon of sliced ham bits that will be used in sandwiches, omelets, and recipes for the next several weeks.  That bag on the left is two ham bones, with a small amount of meat on them.  Those bones are very important to next week's festivities, because Milady always cooks blackeyed peas and cabbage on New Year's Day, and invites all and sundry to our humble feast.  Those ham bones will go well in those peas and cabbage, adding a special flavor that can't be captured with any other seasoning.

Yeah, the sliced ham has a couple of rings of sliced pineapple.  Those rings were a garnish for the glaze, baked on the ham, and I didn't think that it would hurt to include them in the bag.  But, those lovely ham bones are the real attraction for any good Southern cook.  You can season a lot of simple food with a ham bone.
Posted by Pawpaw at 11:37 AM