The Muse tells a story about the lead tank that broke the siege at Bastogne.  It was named Cobra King by its crew, assigned to Company C, 37th Armor, 4th Armored Division. 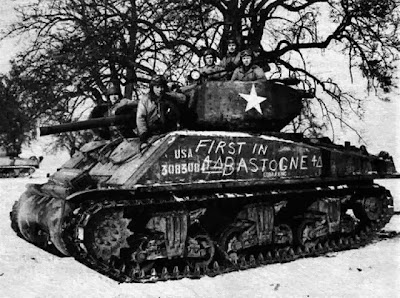 It is a Sherman Tank  The story at Army.mil is here.  Known as the M4, the Army had over 19.000 issued during the Second World War, but this little blog post isn't about the M4, it's about naming tanks.

For some strange reason, tank crews like to name their tanks.  Normally, the first crew gets to name the tank and that name sticks with it throughout it's life in the unit.  When a tank goes back to depot for re-fitting, it gets a new paint job and the next crew that gets the tank gets to re-name it, but if one tank commander leaves a unit, a new tank commander comes in and tries to rename the tank, it's considered bad luck.  Bad juju, a harbinger of disaster.  The one rule is that the tank's name must start with the letter of the assigned Company.

I was assigned to Company C, so my tanks were named ChiTuKemu (don't ask, I never figgered that one out) and Cap'n Krunch (after the breakfast cereal.  When I took the platoon, my tank was ChiTuKemu, but after several months it was sent to depot for a rebuild and I got a replacement tank  My gunner, Sgt Ramirez, got up on the front of the turret, (the turret face, or ablative) and felt gingerly with his fingers.  He knew that whatever that tank had been named, the depot hadn't sanded it away, only painted over the name, so he searched with fingertips and a flaslight.  Then he climbed down and announced to the world that the tank's name was Cap'n Krunch.  As a young, brash lieutenant of Armor, I was considerably dismayed that my tank was named after a breakfast cereal for children, but Sgt Ramirez was already on the front slope with a can of black enamel, so I deferred to the more experienced tanker.

Three months later, we took Cap'n Krunch downrange and began tank tables for annual gunnery quals.  That tank (and Sgt Ramirez, Specialist Elliot, and Private Dudley) helped me get the first of several qualification badges to sew on my tanker's jacket.  Still, I had a tank named after a breakfast cereal.

Thanks for the link Paw Paw.

Lots of love for the ground pounders.

My uncle was in Co B of the 743rd Tank Battalion (DD Tanks) and lead the troops onto Omaha Beach. He was killed on 9 July along with about half of his company. I never knew if his tank had a name.