Ed Driscoll, over at Pajamas Media, is talking about Pajama Boy, and they're trying to decide how old Pajama Boy might be, at least the image they're touting.

They are trying to make the point that Pajama Boy must be at least 27 years old, because he could stay on his parents insurance until he reached his 27th birthday.  Good point.  To my mind, a kid that's 26 and still on his parent's insurance is a severe case of arrested development.  (To be fair, we're talking about the PR image here.  The guy who modeled for the photo might be 24, rides a Harley, and skydives after a successful tour in the military.  I doubt it, but we're not talking about the person, we're talking about the image.)  The image shows a wimp.

This must be a fairly new development.  Let me show you another photo, taken in 1978. 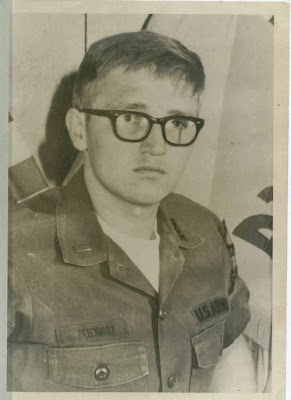 That young man is 25 years old.  At the time, he had completed a bachelor's degree, been commissioned, lead a tank platoon, been an executive officer, and was sitting for a command photo.  He was a father, a husband, and a company commander.  He commanded Co D, 2nd Bn, 4th Bde, at Fort Knox, KY, and his command included almost 350 trainees and cadre.  He considered himself an adult, and so did the Army.

Pajama Boy?  Not so much.  He needs to nut up, grow up, and get out of his mother's basement.  Pajama Boy is a frigging wimp, and he's not representative of anyone I know.  I have a nephew who is about his age, with two tours in the sandbox (US Marines) and a bachelor's degree.  He ain't a wimp either.

Pajama Boy's parents did him a huge disservice when they didn't kick his ass out of the house at age 19.  President Obama does the youth of our nation a grave disservice by infantalizing them until age 26.  It's a damn shame.
Posted by Pawpaw at 6:52 PM

This is a dumb post. Dollars to donuts pajamaboys existed in welle's time, and welles exist now.

Also, and this is very important: Explain to me how extending healthcare to 26 year olds (A low risk group that would stay uninsured, but has no way to pay for a hospital stay in case of an emergency) is a bad thing.

Also, there are plenty of 25 year olds around today that serve proudly.

I must ask... what point were you trying to stupid your way into?

At age 24, I was a college professor. I had a wife, baby daughter, car payment, and mortgage. If you want to, or have to, become an adult there is always a way, with sufficient motivation. I'm with you on this one.