Out of the Woods

I went out to the deer lease this morning to look around and do battle with red wasps.  When I opened the door of the stand, there were six big nests inside the box stand, and I gave them something to think about with a dose of Wasp & Hornet spray, then two big foggers in the stand.  I'll go back next week and see if they've decided to vacate.

Then I drove around to my feeder and filled it with corn and put fresh batteries in the timer.  Looking back toward my stand, I took a picture to evaluate my camoflage.  This photo is taken from the shooting lane and is 110 yards from the stand, which is in the middle of the photo. 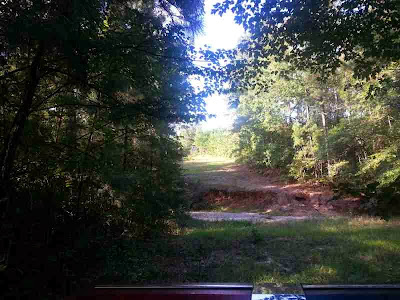 Can you see the stand?  It's way down there in the sunny spot.  Of course, you can click the picture for a better look,  but I'll zoom it for you just a bit. 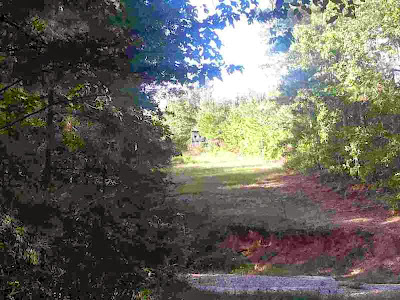 If you look closely at the center of the photo you can see two square eyes.  Those are shooting windows and I'm not happy that we can see them.  I'll have to add some camo to break up those square corners.  One more picture and you'll see what I mean, but the photo is starting to break down at this magnification. 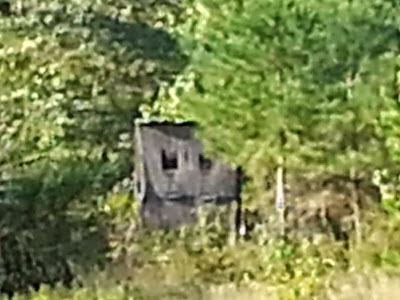 It's not bad, but it's not great.  I need to do something to break up that outline.  Square corners are a bad idea in a woodland environment.  It screams Man-Made and though that stand has been there for four years, and the deer are used to it, every little edge I can use is one I'll use.  I have some ideas to break up that outline and we'll be looking at those ideas in the next couple of weeks.

Email ThisBlogThis!Share to TwitterShare to FacebookShare to Pinterest
Labels: hunting.

My favorithe six legged airborne nemeses is True Value's Flying Insect Killer. It is nearly instantaneous, givong me cover to retreat while ememy dies and is somewhat residual, killing for another four weeks.

Afternoons I see six to eight flies doing aeronautical twists in the living room, so I go through the kitchen, pick up my FLAK and set off a two second burst upwind of the flying circus. By the time I'm back to the couch and have my kindle in hand There are several little six legged raising to vacuum off the carpet. And the smell is not offensive especially since it is carried out through the front window screen, wreaking havoc on whatever six leggers it wafts over.