Jon Gabriel, over at Freedom Works, puts up a great little graphic that explains America's fiscal problem.  Sure, we can pay down the deficit, but what are we going to do about all that debt? 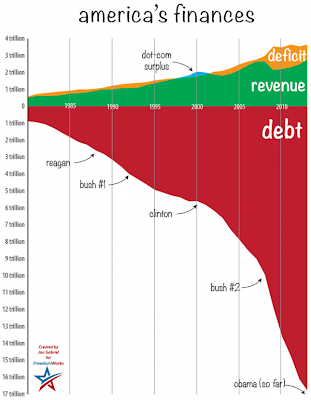 Jon goes on to explain.


The analogy is imperfect, but imagine the green is your salary, the yellow is the amount you're spending over your salary, and the red is your Visa statement. Then imagine your spouse runs into the room and shouts, “great news honey, our fiscal crisis is over. We just got approved for a new MasterCard!” Your first call would be to a marriage counselor or a shrink.

Yes, the analogy is imperfect, but the numbers give you some idea of what we're facing.  As daunting as the deficit might be, we've got to work on the debt.  By this chart, America owes about 7 times what it takes in every year and the debt can be laid across several administrations, both Republican and Democratic.

This is a serious problem and requires serious debate from both sides.  We're going to have to tighten belts and slash the budget if we ever intend to put these numbers in balance.  Kicking the can down the road is not an option.

For some reason this graph reminds me of the diagram of the iceburg that struck the Titanic...