I learned cajun cooking at the knee of my grandmother, Gretna Segura (her maiden name, she married a Scots-Irish named) Anderson.  She was born on Avery Island and spent most of her early years in New Iberia, before she immigrated to north Louisiana after she was married.  She didn't speak English until she went to grammar school, and her voice always had that peculiar, endearing french lilt that I find so attractive in a woman.  When I got into my teen years, I'd ask her how a particular dish was made, and she'd tell me, "First, make a roux."  It's the basis of lots of cajun dishes, and nowadays when someone asks me for  a recipe, I'm apt to channel Gretna and say, "First, make a roux."

A roux is nothing more than oil and flour, cooked on a stovetop in a heavy skillet or dutch oven.  I normally start with equal parts of oil and flour, and I'm apt to add a little minced garlic for flavor.  Let the oil get hot, then stir in the flour.  You might need to add a little more flour, or a little more oil.  What you want is a thick liquid, not quite a paste.  The flour is suspended in the oil and as it touches the bottom of the skillet, it turns brown slowly.  I cook over a medium fire, and if I want to slow down the cooking I'll reduce the heat.  A good roux is only learned through practice, and I've thrown out rouxs that just weren't quite right.  The secret to roux is stirring it, using a flat implement to constantly scrape the bottom of the skillet so that nothing sticks.  You've got to keep that roux moving, stirring constantly, slowly, until all those little flour granules get uniformly brown.  One of the supreme truths to making a roux is  if you turn your back on it, it will burn.  You cannot watch TV, or check on the baby, or talk on the telephone when you're making a roux.  You're totally engaged while making the roux, and you'd better pay attention, or you'll be pouring the whole thing in the dog's dish.

I like a dark, rich roux, so this morning after my coffee, I got out a skillet and began the task of making the roux that will flavor the gumbo I'm making for lunch.  Like Gretna taught me, I stirred, and stirred and stirred.  Once the roux got to the color I wanted, I took it off the heat, and kept stirring for another five minutes while it cooled. 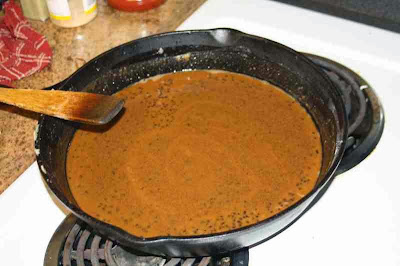 That's a 12-inch skillet and you can see my roux paddle on the left side of the picture.  I started with a cup oil, a cup of flour and about a tablespoon of minced garlic.  In another hour I'll go to the store and get the rest of the ingredients.  I'm making a basic chicken and sausage gumbo and I'll feed the kids and grandkids for lunch.  That roux will make a big pot of gumbo and with my bunch I'm always concerned that the pot might not be big enough.

Bon apetite.
Posted by Pawpaw at 8:56 AM

One point that merits amplification: "I stir the roux for five minutes after I take it off the heat."

I think roux continues to cook and darken even after removed from the heat. Some of the darkening may be due to the increasing transparency of the oil as the flour particles stop out-gassing. Some is due to it actually continuing to cook.

Do you tend to pull it off the heat a little before it is the darkness you want, or do you see very little increase in darkness? Also, what kind of oil do you prefer: peanut oil, soy?

All seven of us kids in my family learned to cook. It is a very useful life skill. Mom beat (figuratively) into us that you cannot cook by remote control, you have got to be there. We learned to make a roux, make decent lump free gravy, fry eggs without them sticking, make good baking powder biscuits, cook potatoes a dozen different ways, especially how to make GOOD mashed potatoes. How to make bread and much much more. I actually taught a certified Home Ec. teacher how to make pie crust. Got an A that quarter.