This morning I went out to the local range to shoot my Ruger Model 77. I bought it off a pawn shop rack in December, and haven't had a chance to shoot it. I had bought some new brass while the rifle was on layaway and had loaded some ammo, but circumstances prevented me from going to the range. This morning was open, so I loaded up and headed out.

I've come to depend on the Nosler manual for a good starting place with reload recipes. Looking in that manual, it told me that 46.0 grains of Reloader 19 and a 117 grain bullet was a good place to start (most accurate load tested), so I loaded some of that as a starting load. I really had no other information, as this rifle is an unknown factor, but guys who like the .25-06 tell me that it is generally an accurate, easy to shoot cartridge. I haven't even floated the barrel on this rifle. I thought I'd shoot it before I start modifying it.

So, with the recommendation from the Nosler manual, I loaded some ammo and set out to learn about this new (to me) rifle. After boresighting the scope and getting the rifle on paper at 50 yards, I moved the target frame out to the 100 yard line and let fly. 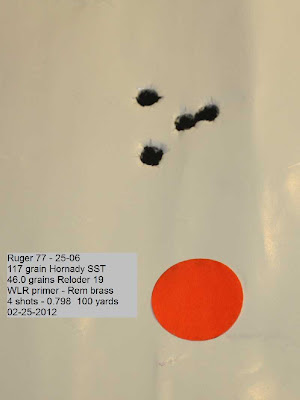 I only had four of those particular cartridges available for group shooting, but the rifle put all four of them into 0.798, which ain't bad for a first time out with a new rifle. The Nosler manual tells me that the little bullet is humming along at about 2800 fps, which isn't bad for a midrange load

Several years ago I was playing with the caliber and found a load of 50.0 grains of Reloader 22 under that same bullet which shoots really well in my son's Model 77. I might load some of those too and see which my rifle prefers. As I recall, the Reloder 22 load was cruising somewhere closer to 3000 fps, and accuracy was under MOA.

Now that hunting season is officially over, and the springtime is upon us, it's time to start shooting again.
Posted by Pawpaw at 8:09 PM

Nice post and those first shots are awesome! Keep it up.