Last September I was surfing The Firing Line forum, and Mike in Texas offered to send me some bullets that he had no use for. They were 87 grain Sierra bullets, .257 caliber, probably made for the .250-3000. I'm a sucker for quarter-bores, so I told him I'd take them, and before many days, they were dropped at my house. I blogged them here and determined that they were made sometimes in the early '50s and early '60s. I had a .25-06 on layaway and thought that it would be fun to play with some ancient bullets. 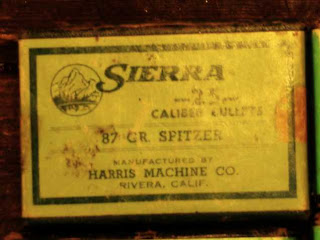 Before I knew it, hunting season was upon me, then the holidays and those bullets lay neglected. I got the rifle off layaway after Christmas, and finally got around to loading and shooting some of them.

The Nosler manual tells me that Reloder 19 is the most accurate powder they tested with this combination, and I keep it on my bench, so I loaded some for the rifle's maiden voyage to the range. After boresighting the scope, and sending some 117 grain Hornady's downrange, I loaded some 87 grain cartridges. 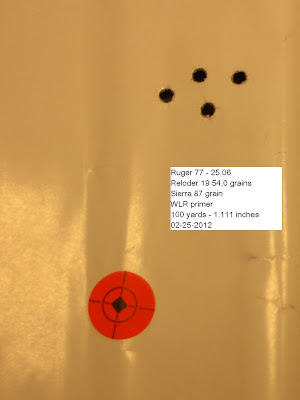 That is four shots into 1.111 inches. Not bad for fifty year old bullets, and as this is the initial firing, lots of load development left to do. No chrony work yet, as I save that for later in the process, but the Nosler manual tells me that these bullets should be whistling along at better than 3300 fps.

Fifty years ago, a one inch group was something to crow about. Nowadays, most rifles will shoot into an inch or better, right out of the box. These fifty-year-old bullets did just fine, with the powders that Nosler recommended. If those bullets were in fact designed for the .250-3000, they are designed to run over 3000 fps. I wonder how they'd do if they smacked into something meaty?

Thanks, Mike, for the bullets.
Posted by Pawpaw at 5:08 PM

That is interesting, and I wonder what that rifle will do with new bullets???