Yesterday, grandson Ethan told me he'd like to go shooting, so I made arrangements to take him and his brother to our private range this morning before the temps got into the triple digits.

Ethan is 11 and his Quinton is 8, so I wanted to start them out with rimfire cartridges, specifically the .22 Long Rifle. I have a Stevens Model 62, which Savage originally marketed in Canada. In the US, it's sold as the Savage Model 64, a generic semiauto with a 10 round magazine.

After a brief safety lesson (the Four Rules are paramount), we set up the bench, talked about how to operate the rifle, and began shooting. I started the boys on the bench, for several reason, not the least of which is safety. Until they're a little more familiar with their gun-handling skills, PawPaw wants to control the muzzle very carefully. Of course, you can click on the photos for larger versions. 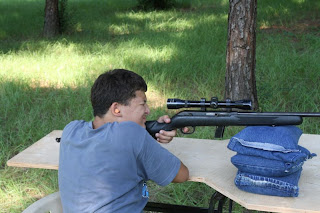 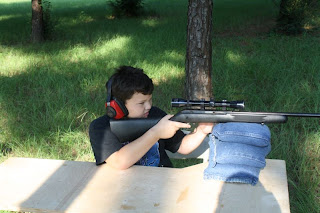 We banged away happily at the paper for a while, switching brothers and sides of the bench as necessary. Then, I brought out my Ruger Mark II. Quinton was really impressed. According to him it looks like a pistol he's seen in a Star Wars movie.

Another safety briefing and a quick explanation about the difference between optics and iron sights and we were ready for the first pistol lesson. 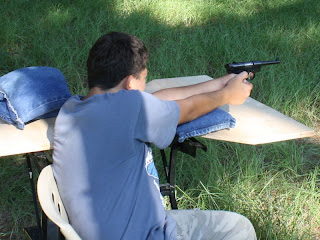 That's Ethan trying his hand with the Mark II. After both boys had run several magazines through the pistol, we went back to the rifle, shooting steel targets that stay hung near our berm. The kids had a ball ringing steel and before you know it, we were out of ammo. 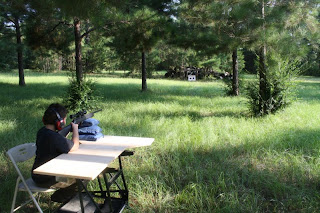 That last photo is looking downrange from about the 40 yard line. Two little boys can go through a couple of hundred rounds of .22LR pretty quickly. I'm going to have to get a couple of more bulk packs.
Posted by Pawpaw at 10:13 AM