While we were training today, a young fellow came out to the range to let us look at some new products from an outfit known as LaRue Tactical. They're based in Leander, TX, near Austin. I don't recall his name, but he was a nice guy, wearing a Combat Infantryman's Badge embroidered on his shirt.

Us old farts know that tactical isn't a piece of equipment. It's a state of mind, but he had some neat toys and he let us play with them. He gave me a cool piece of tactical equipment, and I told him I'd darned sure use it. There are those of you who remember that there are seven places on a GI .45 auto where it is possible to open a cold bottle of beer, and this product is in that spirit.

Ladies and gentlemen, I give to you the LaRue Tactical Beverage Entry Tool. 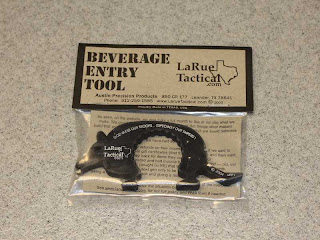 You can click on the picture for a bigger photo. This thing is made of high-tensile steel, shaped like an armadillo (the state bird of Texas), and can open bottles or cans of your favorite beverage. It's all together fitting and proper that LaRue Tactical makes such a device. In the words of Willie Nelson,

When the gun smoke settles, we'll sing a victory tune
And we'll all meet back at the local saloon,
And we'll raise up our glasses against evil forces, singing
Whiskey for my men, beer for my horses.

It is altogether fitting and proper that such a tactical devise exists.

Go surf the LaRue Tactical web site. If any of you Texicans would like one, they make it also in the shape of your Gret State.

If you order one, tell 'em PawPaw sent you. I'm probably going to order a half-dozen as small gifts.
Posted by Pawpaw at 6:56 PM

Don't make the mistake of renting the Toby Keith movie "Beer For My Horses." It's probably the worst movie I ever watched.

Not not quibble, but it is aircraft grade aluminum... I have several in different places. The Texas shaped tool is a special they make, expensive, but the proceeds are donated to help the families of the Fort Hood terrorist attack. I can't say enough good things about LaRue, their customer sevice is A+, and their products are second to none.
They also make a M1911A1 disassembly tool in the same shape!