There will be disagreement about how big the crowd was that showed up for the Washington D.C. Tea Party today, but some are estimating two million. Two million. That's a lot of folks to be hanging around the Capitol.

Via Glenn Reynolds, we post a picture taken by Mary Katherine Ham from the Newseum balcony in DC. 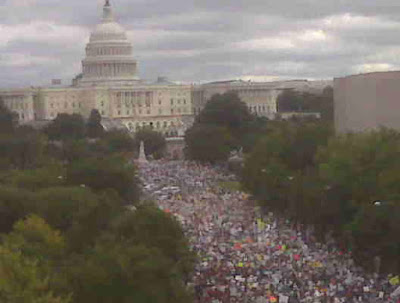 Are there two million people in that photo? I don't know. 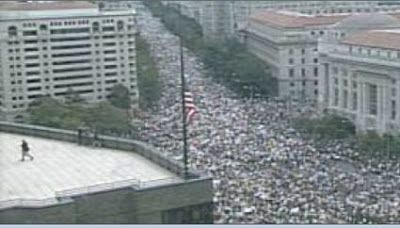 The Associated Press, ever in the tank for Obama, is saying that Tens of Thousands of people protested today. Yeah, looking at those pictures, I'd say that there was ten thousand people there.

Hopefully, Congress is listening. And watching out the windows.

**UPDATE** Blackfive is estimating a crowd of over a million.

Fox News is saying tens of thousands, but neither AP nor Fox is showing pictures of the crowds. Their shots are close-in shots of protest signs, not panoramic shots like I've posted above.

MSNBC calls the crowd "thousands" with a penchant for understatement that makes me wonder how they sustain any credibility at all. They aren't a news agency any more; they're a political propaganda organ, much like Pravda was during the Cold War.

CNN doesn't even bother to estimate the size of the crowd. Since Desert Storm, they've been useless anyway. I can't tell you the last time I watched CNN.

It would have been awesome to be there; I was working too, away from home on a job scheduled many months ago. Sigh... working weekends again.

so have you heard that that pic was from five years ago?