That's the question that the grandkids ask when they come over and PawPaw is on the hook for Thursday night. The eldest son takes his two to karate practice and we started cooking for them on Thursdays.

Tonight, the menu is Salisbury steak, mashed potatoes, early peas and store-bought rolls. I stopped on the way home and picked up several pounds of ground meat, an onion and a couple of cans of Lesueur early peas. I've mixed the ground meat with a couple of eggs, some Tony's seasoning and some bread crumbs. Patted them into suitable patties and fried them in a skillet. While the meat was cooking, I sliced that onion into rings and put it in a big dutch oven with just a dab of vegetable oil.

There's something magical about cooking an sliced onion in vegetable oil. I'm sure a chemist could tell me, but the heat does something to the onion and makes it sweet. My father-in-law would say "Cook it till it's sweet". The onion starts to brown, wilts, and the flavor changes.

Anyway, once the onion is sweet, I put the hamburger patties in the dutch oven and covered onion, beef, and all with McCormick's brown gravy mix. I know that's cheating, and I could have made a roux gravy, but I'm being lazy and McCormick makes a pretty good gravy packet. 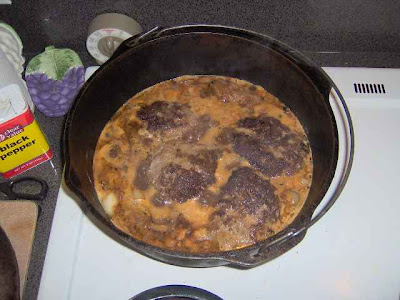 I'm not going to peel potatoes, either. About a half-hour before the boys get here, I'll break open a box of instant potatoes, put those early peas in a pan, and I bet they won't turn their noses away from it.
Posted by Pawpaw at 4:59 PM

Email ThisBlogThis!Share to TwitterShare to FacebookShare to Pinterest
Labels: food

I think the effect you're describing is "carmelizing" the onion's sugars.

Onions, even the strongest, hottest, yellow ones are absolutely loaded with sugar. Heat neutralizes the chemicals in onions that cause the heat and eventually carmelizes the sugar.

Off topic a bit, one of my favorite desserts is onion sandwiches. I use the el-cheapo hamburger buns from the supermarket, WalMart buns are perfect. Add Walla Walla or Vidalia Sweet onions sliced thin and mayonnaise. Spread way too much mayo on both sides of a plain untoasted bun, add at least 3/8" of onion slices, serve. Heaven, bet ya can't eat just one.