I went by D&J Tire today and looked at the Hankook tires. They're good looking tires and the salesman told me that they're Korean and they have sold lot of them. I got the DynaPro ATM, which isn't as aggressive as I might have liked, but they're quiet on the road.

My truck is a bone-stock 4X2 F150 and isn't set up for the mud, but getting stuck on wet grass is a bit too much for me.

Probably the best truck I've ever owned for rough duty was a '79 F150. It had the 300 CID inline 6 cylinder engine and a posi-traction rear end. It was a torque monster. I was in the cattle business at the time and I put Co-op grip spurs on it. I could cross a muddy pasture and never look back. Of course, at anything over 40 mph you couldn't hear yourself think from the whine of those big mud-grips.

Those grip spurs were made by Kelly-Springfield and were in the old style numbering system. I think I used 9.00X15s on that old truck. They were tube-type bias ply tires with a really aggressive tread and they'd pull anything. They were built for the farming trade and wore like iron.

But, they were noisy. I've been looking for a link to show what they looked like, but haven't had any luck. Ah-hah! My google-fu is stong this evening. Here's a picture of a grip-spur tire, stolen shamelessly from here. Scroll down for his take on these tires. 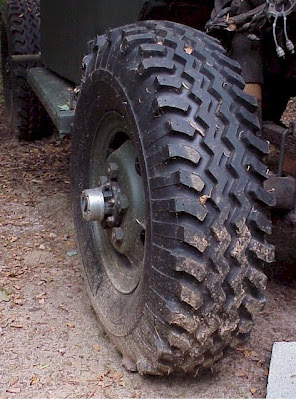 That's what a mud-grip ought to look like.
Posted by Pawpaw at 5:54 PM