This weekend I went out with some friend to watch a Cowboy Fast Draw match, where they shoot wax bullets at steel targets.  Lots of fun, but as all things gun-oriented, it got me to pondering.

I taught my boys to shoot using wax bullets on the back of our tool shed.  Good fun, safe, and very inexpensive.  I didn't really know what I was doing, but I learned that a small pistol primer would push a wax slug out of the barrel.  No problems, easy-peasy.  I could prime a hundred cases, push them into a bar of wax, and teach the boys how to shoot revolver.  I did that with nary a problem, until the boys graduated to full loads.

Of course, the Cowboy Fast Draw Association uses .45 caliber, single action revolvers, with special barss that's been cut to take a 209 shotshell primer.  Still, after shooting with those guys all afternoon, it got me to wondering. So, I came home, did some research, and found this article from the American Rifleman.  This morning I made a trip to the grocers, then walked over to the hardware store to get the rest of the ingredients.

I loaded five rounds each of .38 Special, 44 magnum, and .45 ACP.  I did not drill the cases to enlarge the flash holes, just loaded with standard pistol primers.

The .38s shot great through my Airweight.  I could even double-tap the board I was using for a backstop.  Of course, the wax bullets simply splatted on the board, doing no harm whatsoever.  About that time the neighbor came over, wondering what I was doing.  We took out the Super Blackhawk, and tried the .44 wax loads.  Problematic.  The primers flowed back and tied up the cylinder.  I may have to drill a few cases for shooting wax in the .44.

About that time, the neighbors teenage son came over.  I took out my old Colt 1911 too see if the wax bullets could be used in a semiauto.  Of course, they didn't have enough energy to cycle the slide, but they fed fine and shot fine, and made a satisfying splat on the board we were using for a target. 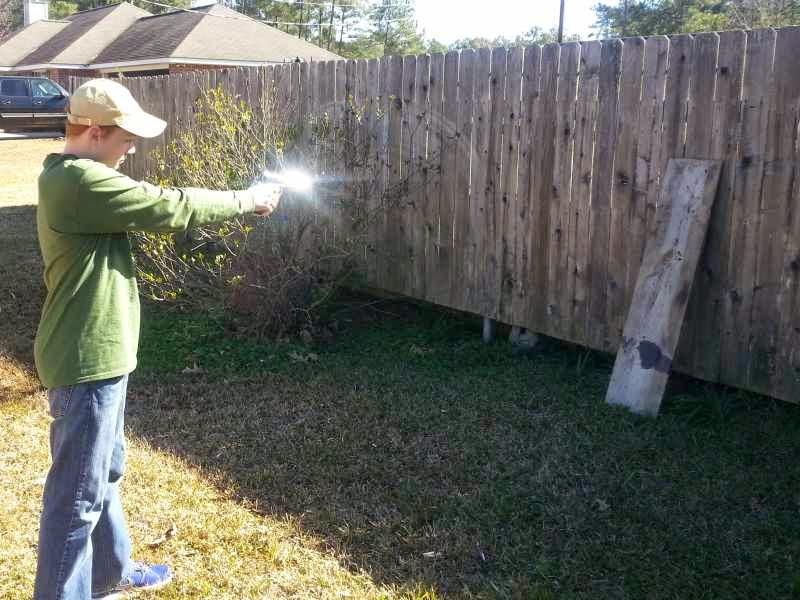 That's the neighbor kid shooting my 1911 at the board.  The old pistol is chromed like a Chevy bumper and we got a lot of reflection, but the gun fed them, you'd just have to cycle it by hand.

Shooting wax bullets is a lot of fun.  I can see that I'm going to have to make up a bunch in .38 Special.  I love this neighborhood.  When someone hears Pop! Pop!, they come over to see what you're shooting.
Posted by Pawpaw at 2:00 PM

I bet wax bullets would make stray cats and dogs "un-ass the AO" at high speed....

I've got to say Termite, that gave me the best laugh I've had all weekend.