Red Beans and rice is a traditional Louisiana meal, normally made on Mondays.  Traditionally, we soak dry beans for several hours, then put them on a slow simmer for the rest of the day. In the mid afternoon, add a chopped onion, some bell pepper, and a pound of good sausage, sliced into rounds.

It's a wonderful meal, served over rice.  Inexpensive, filling fare.  It's easy to make, you can give it a stir ever hour or so as you walk past the stove.  I've made beans by the pound like this.  Probably the largest pot of red beans I ever made was in a 15 gallon pot, for a Boy Scout encampment, but that's another story.  We kept beans in that pot all weekend, feeding 300 boys.  If a kid was hungry between meals (and teenage boys are always hungry), they could stop by the cook tent and get a bowl of beans and rice.  We went through over 50 lbs of dried beans that weekend.

Then, there's the quick recipe,where you cheat and use canned beans.  That's hat I did today. 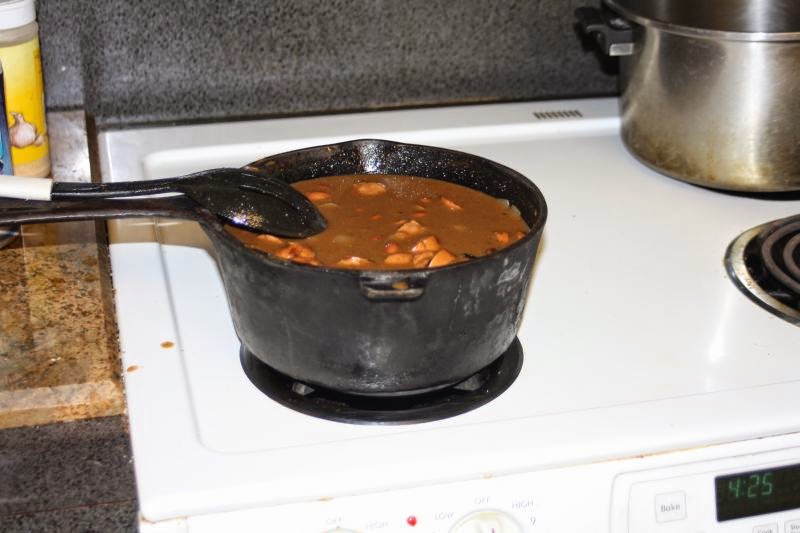 Cut up that sausage and onion, sautee lightly in a frying pan then put it in your bean pot.
Add three cans of red beans.
Mix that gravy mix and pour it on top.  You don't need much gravy, just enough to flavor the beans.
Simmer for an hour, then make a pot of rice.

Whoo, red beans, rice and sausage.  It's what's for supper.
Posted by Pawpaw at 5:08 PM

Beans and Rice is good for you. When my job was mostly field time I would boil up rice every night, and heat it up with beans on my tailgate for lunch the next day. I have been spending too much time in the office the last several years, and eating fast food lunches. I have to shed some pounds, and I'm going back to beans and rice to do it.

'Bout as easy as my method.
1 lb beans, white or red
1 lb smoked sausage
Lg onion and lg bell pepper,chopped
8 cups water
Put it all in a pot and bring to a boil on top the stove, while preheating oven to 275. Put lid on and put in oven for approx 2hrs. Stir once or twice. Fix rice while waiting, make some cornbread. Make ya slap your own daddy. GW

That Boy scout story and recipe / method would be of great help to me this summer ... (I'm not quite the from scratch and improvise cook that you are)