My Dad didn't have a big armory. His guns were working guns, although with the pride that any craftsman takes in his tools, you wouldn't know that they were older than many of the grandchildren.

In 1984 (if I remember correctly) my siblings and I decided to purchase a .22 cal rifle for Daddy. He didn't own a .22, but he was building a house in the country, with a pond, and we thought that a little .22 would be appropriate, so we gathered our dollars and went out to find him a rifle. We ordered a Browning Auto-22, the little wasp-waisted model that loads through the stock. Dad mounted an inexpensive scope on it, via the cantilever scope mount in case he ever wanted to take advantage of the take-down feature. I don't know if this particular rifle has ever been taken down. 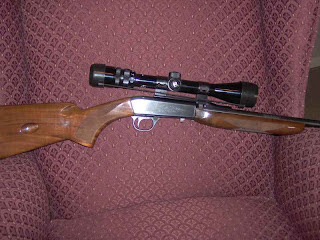 Several months after the scope was mounted, Daddy told me he was having trouble getting it to sight in. I asked him what type group he was getting and he held his hand up, thumb and forefinger describing a circle about 2 inches in diameter. I told him it ought to do better than that and told him I'd look at it the next time we were in the country.

Sure enough, a week later we were out at the country place, and Dad set up his bench, where he regularly fired the rifle. I asked him to post a target, so he stapled a target to a stake, then started walking. 110 long strides later he stuck the stake in the ground. "I usually put it along about here." I asked him again to show me what group size he was getting. He held up his thumb and forefinger in a circle, describing a two inch circle.

Two inches at 110 yards, from a 4 lb rifle, with a cheap-ass scope, and whatever ammo Wal-Mart had on sale. I looked him right in the eye. "Can't help you, Pop. It just doesn't get any better than that. Most of us would be proud to get that group at 50 yards." 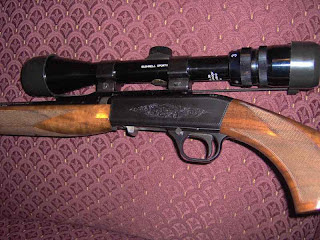 During his later years, he used it to shoot turtles out of the pond and dispatch varmints that bothered the garden. I remember seeing him sitting in a lawn chair near the waters edge, then he'd raise the rifle, peer though the scope, and fire the little rifle. POW and a geyser of water would erupt from the pond. Then a red stain and another loggerhead turtle had made the fatal mistake.

PawPaw, you should write a book. You have such a light touch with words, very sensitive. Again, may the good Lord be with you.
Stephen
Jacksonville

What a touching remembrance of your father, and an enduring legacy to pass down.

Loggerhead turtles? But aren't they endangered or something?

Anonymous said...
Loggerhead turtles? But aren't they endangered or something?

PawPaw replies: They are if they swim in Daddy's pond.