This firearm, I never saw Daddy shoot. It is a Savage Model 720 shotgun, built on the Browning pattern, similar to a Remington Model 11. The forearm is cracked, but the blueing is 90% or better. Small surface rust with minor pitting occurs on the reciever and barrel. 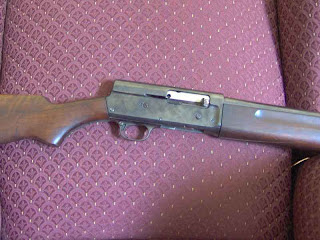 The Savage Model 720 is an interesting shotgun, simply because it was made primarily as a military firearm. Ours has the P device, with the ordnance bomb and US stamped on the left side of the reciever. Research tells me that it was built during WWII and sold to the Army Air Corps to teach aerial gunnery. It has a 2 3/4 inch chamber and a 26" barrel and is probably choked for improved cylinder. It would make a great upland gun. The butt plate is broken, and this pattern of shotgun could use a nice recoil pad. 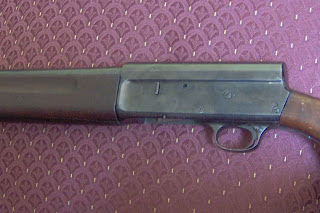 I suspect this shotgun was given to Daddy by a close friend who was in the Air Force in the 1960s. Some shotguns were sold at the local air base when the Rod and Gun Club closed, and I suspect the shotgun was in that group.

Still, it is interesting historically and is now part of our heritage. I'll fix the forearm, have a recoil pad installed, and put it in the gun cabinet for the kids.
Posted by Pawpaw at 4:33 PM

What a fine series of posts this is.

Belated condolences to you and your family on your father's passing.

that model was the 1st 12 gauge (my dad let me shoot it b/c i was tired of hunting with a 20 gauge) i ever used duck hunting at 13 yrs old. man it kicked lick a mule. like oyster, my condolences.

Friend Tamara wrote a nice entry about the Remington M-11.