It's interesting to see what a man keeps in his closet, what he thinks important enough to hang on to for many years. One of those things in Daddy's closet was a pistol. Years ago he told me he had a pistol that had belonged to my uncle Roy Terry.

Uncle Roy was a colorful creature, a lawman from the early part of the twentieth century. He worked for a variety of agencies and was well-respected as a lawman in his retirement years. When he died, my father took possession of one pistol, which Uncle Roy carried as a backup. Dad described it as a "Spanish 32" and I was never able to inspect it or research it.

Dad was right. The pistol in question was made in Spain during the First World War for sale to the French Army. The French factories were busy cranking out rifles, so the Spanish were contracted to make pistols. This pistol is called a Ruby. I cannot find a makers mark or any other identification. The slide is marked 7.65 MODEL AUTOMATIC PISTOL and the frame is marked MADE IN SPAIN. Other than that, all the markings have been lost to the years. 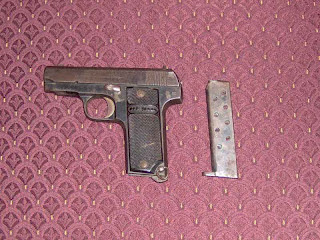 A simplified copy of John Browning's design of 1903 (think Colt Hammerless), this pistol was cranked out by a dozen or more Spanish contractors for the French Army. Knowing the prediliction of the French for surrender, the Spanish doubted that the pistol would ever actually be fired, so certain contractors scrimped on quality control to the point where it was actually unsafe to load the pistol. Some Rubys show excellent quality, some are horrible. The lot of them is a testament to hurried wartime production. 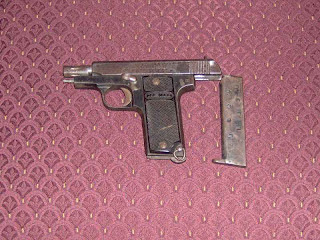 It's a .32 ACP, an interesting little design that paved the way to later Browning designs. Not particularly accurate, not particularly powerful, this is a weird little pistol with a weird little history. I don't know if I'll ever fire it, or if I'll tag it as a curio, write a brief history of it, and leave it in the closet for my children. Some of what we do when a loved one dies is dispose of those things that are no longer useful, and may in fact be dangerous. This little pistol may be donated to a museum, so that it will never again be fired.

Then again, it might be a fun little shooter. We'll see.
Posted by Pawpaw at 9:55 AM

I saw this pistol,or one very much like it, last week. My gunsmith buddy and I spent a while looking through books for marks and manufacturing dates, no luck when I was there. Glad you found out where it was made. It's a nice little shooter, great history. Cherish it
Thad