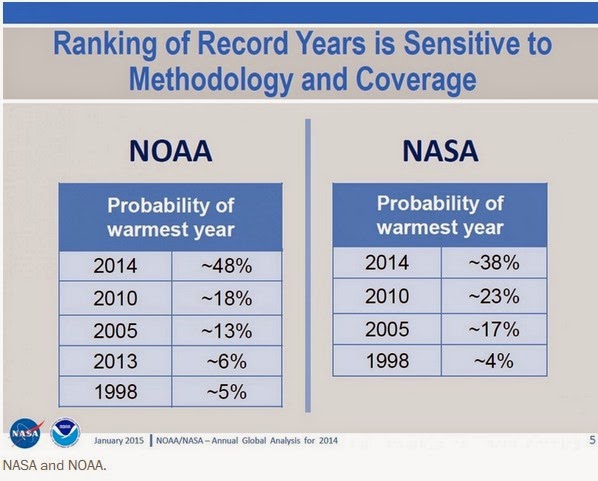 So, even NASA and NOAA can't say with any confidence that 2014 is the warmest year of record.  Sorry guys, but even a 48% confidence level doesn't start to be convincing.  Either it was, or it wasn't.  Come back when you've got an answer.

But, until the jet-set quits flying their private jets around, talking about global warming, I'm not convinced.  If it's a problem, park the damned jets and Skype the conference.
Posted by Pawpaw at 8:33 AM

Reckon how "they" explain the Medieval Warm Period? Or the Maunder Minimun, aka "Little Ice Age"?

Especially since the measurements are based on 'models' not raw data... Suspect at best...

US$90T carbon tax scam proposed. I have Probable Cause on Attempted Aggravated Grand Theft for Al Gore. I'm retired, but still own a pair of handcuffs...