I've been watching the standoff in Nevada at the Bundy Ranch.  Ostensibly, Bundy runs cattle on BLM land.  Bundy and the BLM have been in a pissing contest for several years, and the BLM was trying to evict his cattle, based on an endangered desert tortoise.  For a better rundown, Powerline has the goods, and Alex Jones Inforwars has been following the crisis since it began.  (Yeah, I know, it's Infowars, but even a blind hog finds an acorn once in a while.  Get over it.)  However, just recently, there has been speculation (and a little fire under the smoke) that Harry Reid, the esteemed senator from Nevada had a deal working to make a bit of money from the land that Bundy was using to graze cattle.


The new head of the BLM, Neil Kornze, worked for Harry Reid as a policy adviser from 2003 to 2011. It is reasonable to assume that Reid got him the BLM job, and I would hazard a guess that Reid saw the situation turning into a public relations disaster–Nevada’s Governor and Senator Dean Heller, both Republicans, were more or less siding with Bundy–and told Kornze to give it up.
It still isn’t clear what the crisis was all about. Rumor has it that Reid wants the land for a giant solar farm that would be supplied by a Chinese company and, presumably, subsidized by the federal government. Reid’s son is apparently a participant in the deal. Whether that is true, I haven’t yet tried to figure out. One thing I will say with some certainty, however, is that tortoises had little or nothing to do with it.

Of course, the BLM over-reacted, and there were armed officers there, and plenty of good opportunities for outrage.  It seems that the BLM set up a "First Amendment Area" that outraged everyone. 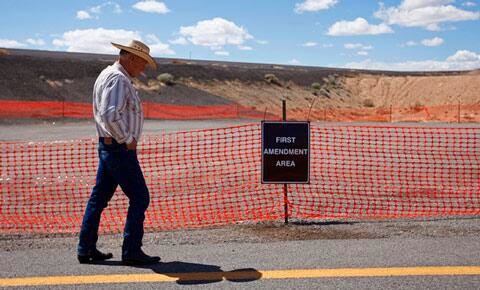 Which prompted this map for our officials to use when trying to decide where the 1st Amendment can be defended. 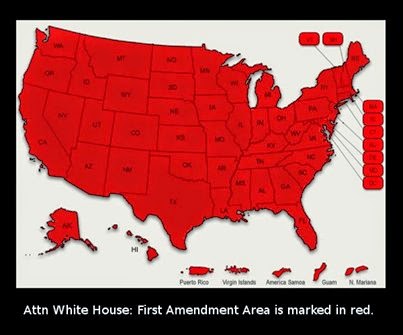 Yeah, I'd say that sums it up.  The Government doesn't get to say where we can exercise our 1st Amendment rights.

It seems that this weekend, the BLM decided to pack up and go home.  Someone with a brain in his bead decided that this thing was becoming a public relations nightmare.  What's interesting, though, is to understand that this is Harry Reid's state, and if there is money to be made, you can be sure that Harry has his hand in the pie.

Harry Reid is a despicable little man.  He's spent his entire life in public service and has amassed quite a fortune for himself and his family.  The very idea that Harry's son represents a Chinese firm that wants to use government land in Nevada for a green-energy project tells me everything I know about this drummed-up crisis.  If you think that this little debacle had anything to do with cattle, or with tortoises, you've been reading the wrong newspapers.
Posted by Pawpaw at 3:54 PM

No PawPaw, that is State or Public land, not govt. There has not been a deed written to date that says the Feds have ownership of any property.