Yesterday, Milady and I were shopping for Sunday.  Normally, Sunday lunch takes place at our house after church, and we planned to let the grandkids enjoy the pool while I cooked burgers and dogs on the grill.  When we got to the hot-dog aisle, Milady picked up a couple of packs of Ball Park Beef franks. 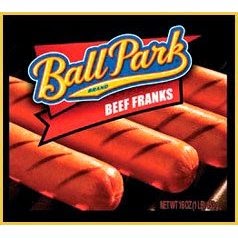 I asked her if she wanted the less expensive franks, and she looked at me like an errant child.  "I think we can afford the good stuff."  So, today whilst cooking the burgers I put those franks on at the end of the grill.  After the grandkids had been served and while my adult children were fixing their plates, I grabbed a hot dog bun, added a little chili, some mustard, and put one of those franks on the bun.

Great Jumping Jehosephat!  That's the best hot dog I ever put in my mouth.  I'm a big fan of sausage, both smoked and country, andoille, and Italian, along with Polish, German and Cajun.  I love boudin, and all forms of sausages, but this Ball Park Beef Frank took my love of sausages to a whole new level.  Who knew that so much joy could be had from a simple hot dog?

Enough with the cheap dogs.  If Milady says we can afford the good stuff, I'm okay with that.  Ball Park Beef Franks have the PawPaw seal of approval.
Posted by Pawpaw at 6:41 PM

I vote for Vienna Beef or Hebrew National, myself.

I've never tried one, guess I'll add them to the grocery list!

I used to buy Hebrew National is the best national dog, when I'm too lazy to drive 15 miles to the good German meat market Gartner's for their Frankfurters, but I find that Nathan's Famous are actually better than Hebrew National these days. In Oregon, we have several decent German delis/meat markets, including one that sells Landtjaeger. The Hunter's sausage is special. It has a high fat content, 30%, and also a high grain content. It is the original survival food. They keep for a week unrefrigerated, even longer if you carefully dry them. In my days of stomping the deer woods, a full canteen and two Landtjaeger kept me going dawn til dark. If attitude failed, a small flask of spirits completed my provisioning...

Texas grocery chain H.E.B. sells a coarse-ground beef tubesteak with bits of jalapeno. It's just about delicious. Next on the list is Nathan's, Vienna Beef & Hebrew Natl.

Don't much care for Oscar Mayer...

We do Nathan's and Hebrew National (that's all that one grandson will eat)but we might have to try these.