There is an axiom among rifle shooters that you're in good shape if you can hit a 9" paper plate at any range where you might resonably expect to shoot at a deer-sized animal. This comes from the fact that the heart-lung area on a standard whitetail deer is approximately 9" in diameter.

That deer I missed on Monday had me bugged. Fifty yards away, she was quartering away and I missed her. Was it the rifle, or me? Did something change on the rifle? Was the scope jarred off its zero?

There's only one way to answer these questions, and that's to shoot the rifle at some reasonable range and see if you can hit the heart-lung area of a standard deer. So, this morning, I went to my private range and stapled a 9" paper plate to the side of a cardboard box.

The first two shots went about four inches high, which isn't the way I sighted the rifle. It's supposed to be one inch high at 100 yards. I recalled that when I sighted the rifle in the late summer, I had used a bench rest, and I wondered if that would change the way the rifle recoils. In the hunting fields I shoot the rifle resting on the palm of my hand. I'll take a rest when I can, but I want the rifle recoiling from my palm. But, if the rifle is firing high out of my hand, I want to fix that problem, so I took out a coin and adjusted the scope.

To as closely as possible replicate the conditions in the field, I wanted the rifle recoiling out of my palm. I also wanted to increase my heartrate and respiration, so I walked briskly across the pasture, looked at the target and walked back, then leaned against my pickup, rested my elbows on the hood and fired three shots. 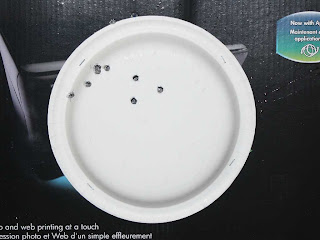 Those first three shots appear as the triangle in the center of the plate, about an inch high. So far, so good. I walked toward the target and every few steps I'd kneel and fire a shot as rapidly as the crosshairs appeared to be on the plate. I fired the last shot at 50 yards, as quickly as I could.

All of the shots fell into that 9" paper plate. Evidently, I'm pulling my kneeling shots to the left. After the hunting season I"ll work on that problem. The shots taken with an elbow rest fell into a triangle that measures 1.4 inches, so I feel better about the way the rifle shoots.

This particular rifle will shoot minute-of-angle with the ammo I'm using, when I have a good rest. In the hunting fields I'm likely not going to have a good rest. I'll be out of position, breathing hard, trying to steady the sight picture enough to squeeze off a good shot.

Now the question is answered. Plainly and simply, I missed that deer on Monday morning.
Posted by Pawpaw at 11:06 AM

Oh well, cause found... We ALL miss occasionally (me, maybe more than occasionally); and it's interesting that kneeling you would pull shots left, I'd think those would drop right for a right hander...