This morning, I told Milady that I wanted to make a bean soup tonight. Then, I left for the deer lease, forgetting to soak my beans. No problem. I stopped at the grocery store and bought canned beans, and my soup is simmering on the stove for tonight's meal. 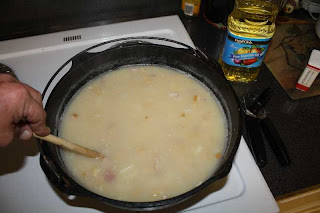 On the way back from the hunting lease, I stopped at the grocers and picked up some canned beans. (These were Sure-Fine Butter beans, but you can use something else.) Then, at home, I opened the cans and dumped them in a large pot. Peeled four medium white potatoes, then cut them into 1/4 inch cubes. Added those to the pot. Then, I took out the leftover Christmas ham, cubed that also, about a cup in the mix. Added a little salt and pepper, added enough water to cover it, then got it simmering. I'll stir it occasionally until supper, keeping it at a slow simmer and making sure that it doesn't boil dry. Add water as necessary.

This is an old recipe, something that a cook could put together for very little money and feed a crowd of kids. Beans are cheap, as are potatoes. If you were using dry beans, you'd want to put them on to soak early in the morning, then cook most of the afternoon. Using canned beans, I cheated. That little bit of meat is there for flavor. If a down-home cook didn't have any ham, they might have used salt pork, tasso, thin sliced sausage, or a ham hock.

What you want is for the potatoes to cook almost to pieces, and the beans to almost fall apart.

Serve with saltine crackers and iced tea. It's an old favorite for a cold winter's night. And very, very frugal. I bet that I don't have $5.00 in that pot, and I could feed eight or ten people.
Posted by Pawpaw at 3:20 PM

Deer camp food. Nothing like hot bean soup in front of the camp fireplace, after an evening of hunting in freezing weather.

Good recipe, PawPaw. The only thing I would change is to use Yukon Gold potatoes, they have better flavor and you don't peel them, just wash and dice them.

Also, I find few hams these days which have enough flavor to stand up to soup preparation. I use ham hocks, exclusively. Find a market that sells REAL smoked hocks, some of them are chemically-smoked nowadays. Keep a bag of them frozen in your freezer.

I prep the soup differently. First, I soak the beans, then cook the ham hocks ((two is good enough if they are sizeable). Takes two hours at a good boil. Pull and dice the hock meat and get rid of as much fat as you can. I use the skin in the soup, diced fine.

Take the broth resulting from boiling the hocks and cook the beans in it. Cooking soaked beans takes 45 minutes to an hour. Plenty of garlic and some onions round out the flavor, they go in with the beans. My mother's recipe, and she used Bay leaves, but I don't.

I must be weird, because regardless of cost, that is my favorite meal. Great blog, I enjoy it!