I went to the lease this morning, accompanied by a grandson, Zachary, eight years old. PawPaw had lots of geedunk in the hunting bag, to include trail mix and beef jerky. Zach brought along something he calls a Nintendo DSI, which is a neat little device that runs on batteries and lets him play video games when he's bored.

Here's a photo of Zachary in the deer stand, munching on some beef jerky. 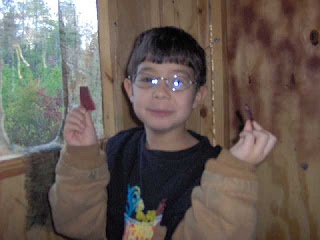 Here's the view out the window, looking down the pipeline. My corn feeder is in the opposite treeline, a measured 120 yards from the stand. The top of the hill is 200 yards. 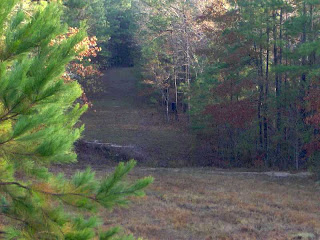 It's one of my favorite places in the whole world.
Posted by Pawpaw at 12:07 PM

I can see WHY it's a favorite place, and more 'specially when you have a grandkid with you.
;-)