One of the traditions of our family Thanksgiving dinner is that we go shooting after the meal. Mom has plenty of land and we set up an impromptu range, get the rifles out, and have some fun shooting. Some of my nephews only get to shoot once a year and it's something they look forward to doing.

My sister came out and wanted to shoot a pistol. She's thinking about obtaining a CCW in her resident state and wanted to familiarize. Unfortunately, the only pistol I had available was the Kimber 1911 in .45 ACP. Not the best pistol for a neophyte, but she gamely stepped up and fired a couple of magazines, declaring it a lot of fun. I told her that I'd be happy to coach her and that she should seek a coach in her home state.

Then, the boys and I got out the rifles. My youngest son wanted to try some loads I have developed for his rifle, a Savage 10 FLP in .308 Win. I had loaded some Hornady Match cases with varying weights of Reloder 15. This rifle has less than 100 rounds through it, but it's looking like a winner. The best target today.. well, I'll let you see it. 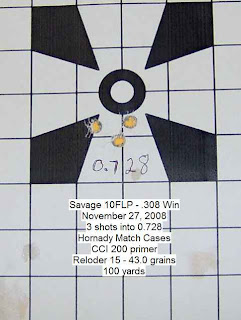 Then, my second son hunkered down behind his Savage 11FV in 7mm Magnum and showed little brother how it's done. His first three shots went into a half-inch. His next three opened the group up to just over an inch, but that's with hunting ammo. His target is below. 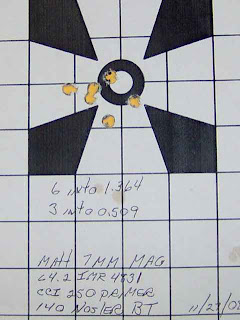 All together we fired two pistols, and a number of rifles, including a Winchester 94, my Bushmaster, a guests FAL, andthe two Savage bolts. All the nephews got to fire everything and we had a great time.

Which reminds me. I still have to clean that Kimber.
Posted by Pawpaw at 5:37 PM

Nice! Good tradition too, I've got to look into that one! Good shooting by the kids too :-)

Hmmmm...you don't have a family, PawPaw, you have a Rifle Squad!

I had a "blast" on Thanksgiving with you...thanks for letting me try my hand with your pistol. After the holiday season, I'll start looking for a hand gun and find a range...and learn the gun laws of my state :)
Franniedez