I went to my younger sister's this afternoon and hung curtain rods in her sun room. Her sun room is made entirely of brick. Hard brick. The house is eighty-something years old and the bricks are fully seasoned. I was drilling them with masonry bits and each bit was good for about two holes.

There is still one rod left to hang, but I ran out of bits and she declared the job done. I'll finish it up later, sometimes between now and Christmas.

Yesterday while I was taking pictures of the stream below my stand, I took the picture below. I was facing nearly east and the light was playing tricks in the trees. As usual, you can click it for a larger image. 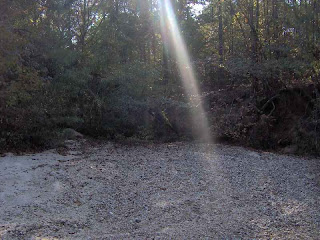 That's a huge sand/gravel bed that was deposited during Hurricane Gustav. The water from the almost 20 inches of rain cut the banks and moved a lot of material. Some of that is deposited here, where the water pooled.

From where this picture was taken, if you turn left 90 degrees, you're looking north up a pipeline. Just inside the woodline to the right is a small stand of white oak trees. Historically, rutting bucks make scrapes in the leaves under those white oaks. No scrapes yet this year, but this is one of the areas I'm watching. 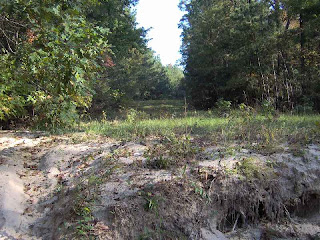 I'll probably set up on the south side of the pipeline next weekend and watch both the stream bed and the white oak side of that pipeline. I'll have to remember to take a lawn chair. It ought to be fairly easy to construct a ground blind when it gets light enough to see. Or, I'll just back into the thicket far enough that I can stay hidden while I watch through the woods. For hunting like this, I'll be within 70 yards of anything I'd be able to see, so the scoped bolt rifle doesn't make a lot of sense. From a stand in this area, the Winchester 94 with cast bullets and iron sights should be perfectly adequate for the chore.
Posted by Pawpaw at 4:19 PM

Nice Plan :-) My 94 is being checked out by my gunsmith right now!

picked up a nice old 336 30-30 from a pawn shop -- going to the Son&Heir. He's cross dominant so hoping it works out better for him than his boltie.

Largely you to blame. :-) Always been a 30-06 bolt M70 for everything type hunter. You got me to thinking about a 30-30 a couple years back when I first came across a post by you about casting for yours.