You all know the fondness I feel for my rifles. One of my favorites is the Savage 110 in .30-06. It's the one I planned to hunt with this winter, and I may still get to hunt with it, although it needs a new stock.

I dropped it out of the deer stand this morning and broke the stock at the wrist.

No, I wasn't being careless. I was being careful. Here's what happened.

A long time ago, I resolved to never climb into a deer stand with a loaded rifle. More so, to never climb with a rifle on my back if possible. My stands have a piece of rope attached to the rail, whereby I can tie the rifle off, climb the stand, then raise the rifle into the stand. At that point, it's loaded and placed on safe. I reverse the process when it's time to climb down.

This morning was no different. I climbed the stand, hauled the rifle up, then loaded it. After several hours, I decided to climb down. I unloaded the rifle and tied it off. I used a slip knot around the forearm and a half-hitch around the barrel. I've lowered rifles using this combination of knots for years with nary a problem. This morning, the knot slipped. I watched the rifle fall to the ground butt first. I watched the muzzle as it fell, thinking how fortunate I was that the rifle was unloaded. Safety first. That's me.

This is what I saw after the rifle came to rest. 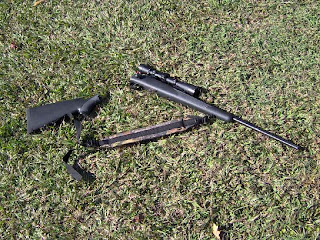 I said a silent prayer of thanks for my safety, then climbed down and collected the pieces.

Now, though, I have a project. New stock, fitting it, bedding it, making sure everything works. The old Savage rifle will be back, better and stronger than ever before. I'm thinking a laminate stock. What say you?
Posted by Pawpaw at 1:40 PM

Took my first shot for the season today. Had a dud primer. I lifted my bolt to recock and fired again. Still no juice. I had to wait to make sure I didn't have a hang fire, then I quietly removed the offending cartridge and loaded a new round by slowly working the bolt. The deer was almost out of range by then so I rushed it, gut shot the deer, lost the trail after 3/4 of a mile. Damn!!!

6 or 7 years ago I made up 50 rounds for my 30-06 that were particularly accurate and I've killed 12 deer with them since. In that 6 or 7 years they have spent time in HOT trucks and my garage, so I blame myself for the bad primer.

Sorry to hear about the damage... I'd recommend HS Precision replacement.

Check the weight and the shine of the laminate.

You want plug and play and accurate?

Certainly not the lowest cost option but the value proposition and purty pictures does give one pause. More money in the stock than the rifle I s'pose...

Saying a prayer of thanks for your safety too! My condolences on the rifle.

Ouch. That's painful to look at, but a lot less painful than falling out of the stand on top of it...

I tie a clove hitch around the pistol grip/trigger guard, and a couple of half hitches around the barrel just above the stock.