We went to Mardi Gras in Mamou, LA yesterday and while we were walking on Main Street, my son pointed out something that I had stepped over. 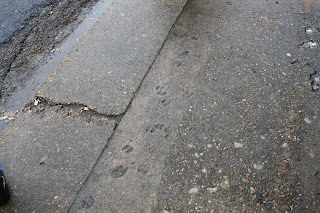 Those are deer tracks, in concrete, on the sidewalk in downtown Mamou. We were between Fred's Saloon and the Hotel Cazan on the main drag of town.

What was that deer doing in downtown Mamou?

Update** Junior points out in comments that those look like hog tracks. Maybe so. Still, the question remains: What was that hog doing on Main Street? The simple answer is: Walking in Concrete.
Posted by Pawpaw at 5:12 PM

The pigs who made those tracks were probably on their way to a cochon de lait as guests of honor.