It's been a while since I talked about my steel targets and we've been through some revisions, so I thought I'd give a lesson's learned update.

I really like the gong targets from Quality Targets, especially the 9" flat-topped gong.  We've been shooting it for two years now, and it is holding up remarkably well to everything we can throw at it, from .22LR, through the various .30 calibers, all the way to 7mm RemMag and .45-70.  This is a really great target and I wish I had a dozen of them.

One thing I've learned is that hanging them from chain is problematic when you're teaching grandkids.  Grandkids tend to miss, occasionally, and they'll shoot your chain, so I cast about looking for something sturdy enough to withstand centerfire bullet strikes and still hold the target.  I think that discarded fire-hose will the key, but more on that later.

Several months ago, a friend brought me some steel blanks.  He works in a steel fabrication shop and they had a custom order for some steel parts.  He doesn't know what type of steel it is, but tells me that it's the hardest thing he ever cut.  They're 6" "mickey-mouse" circles and he thinks they'll stand up to centerfire bullet strikes.  The steel measures 0.370 on my micrometer, and seems fairly heavy.

At about the same time, elder son was able to scrounge some 8" diameter fire hose that the local station was throwing away because it is out of spec.  Fire hose is tough, and stiff, and I had a helluva a time cutting it, requiring tin snips to cut the rubberized fabric.

So, I mounted the gongs to the fire hose with bolts and washers. 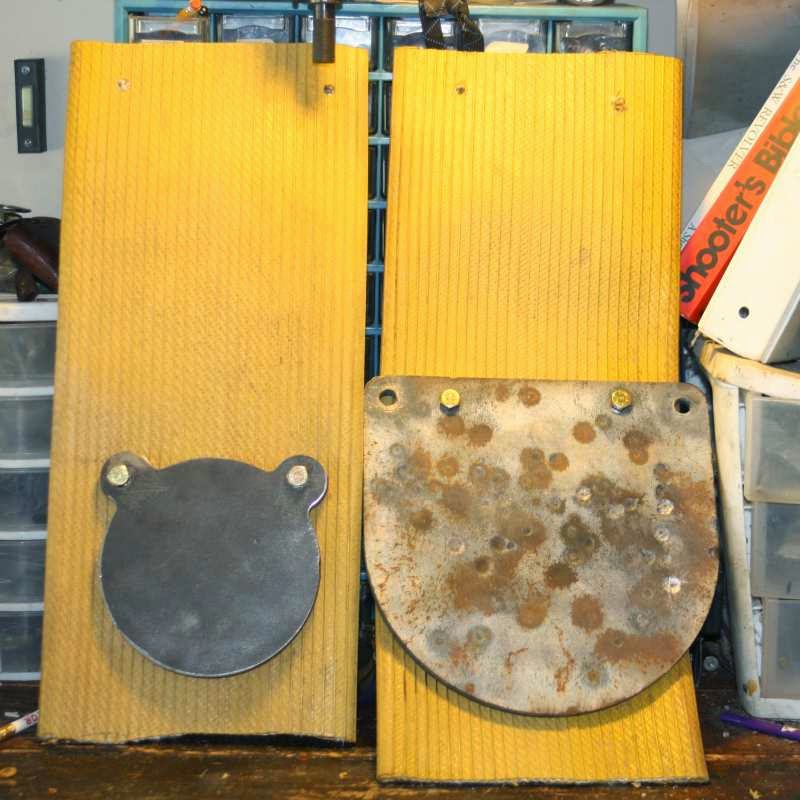 I'll hang the whole shebang with chains, and hopefully the chain will be far enough from the target that the grandkids won't hit the chain.  The firehose is tough enough so that the bullets should just zip through without much damage, and the yellow background gives good visual contrast.  The little homemade target is on the left and the Quality 9" gong is on the right.

As you can see, the big gong has been struck numerous times and is holding up well after two years of getting hammered by grandkids.  I hope the smaller gong holds up as well.  I've got three of those and I have high hopes for them.
Posted by Pawpaw at 4:34 PM