Today I took three hours and went out for a range day. I used the LDWF range at Woodworth.

I know that many of you notice that every rifle that the gun rags write about is capable of minute of angle accuracy. Well, that's true, most rifles built today are capable of MOA accuracy. However, most gunners are not. Accuracy is indicative of practice time. Most recreational gunners can get in the three to four minute range and stay there until they get training, then their groups start shrinking. Equipment and technique are important, but they can't take the place of regular practice. Shooting scores are very erodable. If you don't get enough trigger time and learn from each shot, your groups expand.

In short, you won't see any MOA targets here today.

The first rifle out of the bag was the Winchester 94. This rifle has a Williams FP sight with a standard bead. My ammo was my own blend of the incomparable Lyman 311041 cast bullet, lubed with Lee Liquid Alox, loaded over 27.0 grains of surplus 4895. This load is a game-getter. I decided to get off the bench and do some position work with this rifle, to replicate game shots. 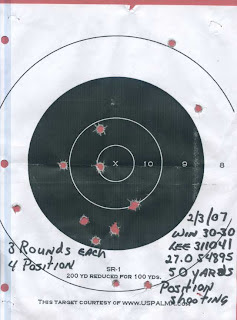 I scattered them all over the page at 50 yards. Three rounds each from prone, sitting, kneeling and standing. Still, seven of the twelve are in the nine ring or better. This is the type of shooting that I need to do more often. It's time to load a bunch of these and devote an afternoon to position shooting. This ammo is cast bullet ammo, which means I make the bullets in the garage. The powder is the Surplus 4895 that I have found so versatile, and it launches those cast bullets at an average 1729 fps with no leading.

After I ran out of ammo for the .30-30, I broke out the Savage 110, in .30-06. I have made some changes to this rifle since the last report. I have added a better recoil pad and changed the way the scope was mounted.

I did forget to boresight the rifle, so the first half-dozen shots were off the paper and it took another half-dozen to get it into the target area. I wanted this ammo to shoot two inches high at 100 yards. Sighted like that, it'll be dead on at 200 yards and down just three inches at 250 yards. I didn't bring much ammo to the range, and the last three rounds gave me this target. 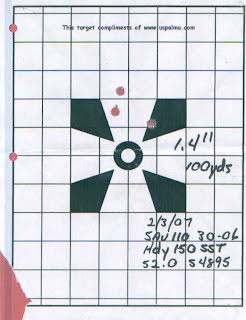 This load uses the same 4895 powder that I used in the .30-30 load. It's surplus powder and was originally developed for .30-06 military ammo. 4895 has been around in three guises over the years. IMR 4895 and Hogdgon 4895 are both canister powders that are available today. This surplus powder is off the market right now, but has proven very versatile in medium rifle cartridges. I use it in .30-30, .35 Remington, and .30-06.

That isn't too shabby and it shows that I haven't been getting enough trigger time. The rifle is certainly capable of better accuracy than that, and I have only myself to blame for not taking advantage of it. It's time to load some more ammo and make myself get out to the range more often. I need more trigger time.
Posted by Pawpaw at 5:32 PM

Ah, the oldies but goodies.

I'm glad to see someone else using (essentially) that same .30'06 load. Around 1964, I fell heir to a Czech Mauser sporter. A college student with part time jobs couldn't afford much factory ammo. At Knight's Gun Store in Fort Worth, I bought dies and asked Mr. Hollis Pricer what to load. Off the top of his head, he said, "Anybody's one-fifty and 52 grains of 4895." I snagged a box of Remington 150 soft points, a can of IMR 4895, and a box-o-primers, also Remington.

Despite having shot varsity small bore in high school, I was NOT a serious rifleman. I hadn't looked closely enough, and the bullets I had were the round nose type, intended for the .30-30. The loaded ammo didn't LOOK as spiffy as the pointy factory spitzers, but, oh, well . . . . I never experimented, just used Hollis's load, and the rifle liked it well enough. I set the sights for dead on at 100, and shot two or three inch groups. 'Twas much later that I learned to set the POI a bit high, to extend the dead-on hold. Heck, I hunted in brush back then and a hundred was a long shot.

The Mauser got traded away. . . . About 14 years later, I became serious about deer hunting and riflery, and got a Ruger 77 in '06. I went to work up a good load, and in digging out my rifle dies, found some of my old handloads. First group from a good rest went into 3/4 of an inch! Next was just over an inch.

Yeah, I know that the milsurp 4895 is a touch different from the IMR and Hodgdon's types. I also note that the fine old load is well above currently published maximums, and powder formulations DO change over the decades. Start low and work up, boys and gurls, and proceed at your own risk . . . .

Paw Paw, thanks for inspiring this stroll down memory lane. ;)
JPG

I have a 9.3x62 that just cries for cast bullets for practice. I need to have a mold made. And now that I also have a 35 Whelen, I really need to get into casting. I also have a lead ingot that weighs about 100 lbs or better. Can I trade you some lead for some hands-on casting instruction? Heck, I live in Libuse, which is only 15 min from you.

Termite. I would be happy to show you how to cast. There is nothing to it, actually.

Email me and we'll set something up.

I may be closer than you think. I live between Libuse and Holloway.

I am far more intested in guns that do "Minute-of Target."

Thanks for the report, and keep shooting those old loads!