We got back from Big Mamou a couple of hours ago. My new daughter-in-law had never been to a traditional country Mardi Gras.

You can't go to Mamou unless you pay tribute to Fred's Lounge. Our second stop was there for pictures. You can, of course, click the pictures for a larger image. 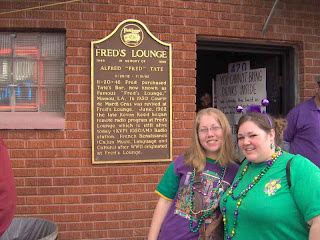 Here my daughter-in-law, left, and my daughter pose in the door of Fred's Lounge. This is the location of a long running radio show featuring traditional cajun music. Fred's has been the center of the Mardi Gras celebration for as long as I can remember.

Then, we danced in the streets and awaited the return of the Courirs. These guys dress in costume and go from door to door around Mamou, partying, chasing chickens, and begging food for a community meal. It's all done on horseback. Vast qauntities of beer are consumed during the day. 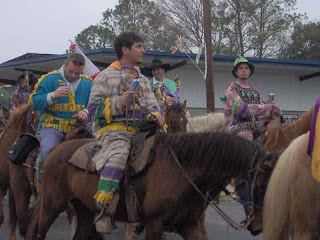 By the time they get back to town, the horses are tired and the men are... a little worse for wear. You might notice that every man in the picture is carrying a beer in his hand. This is not coincidence. Every man on horseback was carrying a beer or other adult beverage on his ride through town.

After the parade, we left Mamou and plotted a course for Marksville, home of the only casino in the area. They have, not coincidently, the best casino buffet in the area. We took the kids to the buffet, watched them put on the feed bag, then we trekked back toward home.

Now, I get to crawl into bed to go to work tomorrow, then to church at 6:00 p.m. to begin the lenten season. Lent is the reason for Mardi Gras, after all.
Posted by Pawpaw at 10:04 PM

What are you giving up for Lent? Not blogging I hope.

Ya'll should have also some a little more south to the Tee Mamou Mardi Gras in Iota. You could have parked at our new house, umm... helped me finish some painting in it, then walked to the festival!!