Chop your veggies and debone the chicken.  Cut your sausage into slices.  Take out a cast iron pot, add a little vegetable oil and sautee the onions, bell pepper, and sausage until the onion and bell pepper are tender. 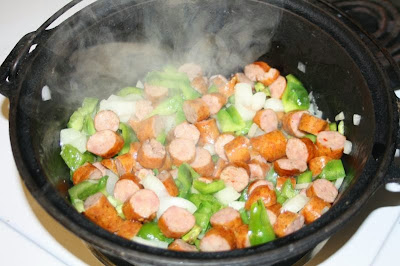 When the veggies are tender, add the chicken and sautee for a few minutes. 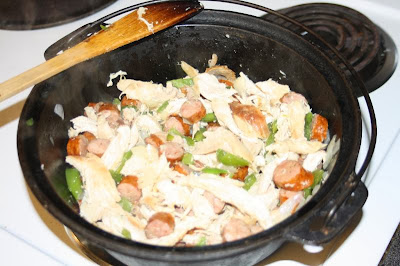 Chicken in the pot.  That's looking good, we'll stir it every few minutes and open a cold beer.

Next, open that can of Rotel tomatoes.  Pour it in the pot, with all the juice. 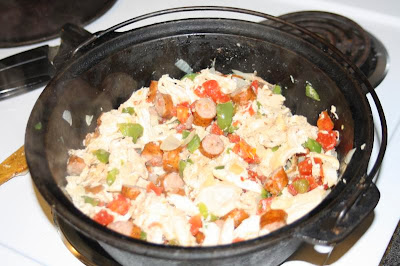 Rotel tomatoes in the pot.  That's looking good, and those onions, pepper, sausage and chicken are still cooking.  The kitchen is starting to smell wonderful.  Now we'll add the rice. 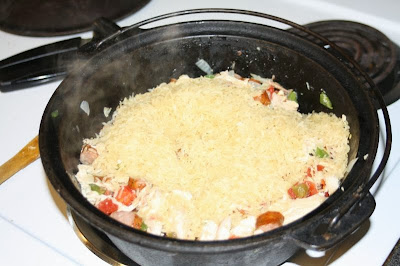 Two cups of rice.  Stir that in, and we'll open the chicken broth. 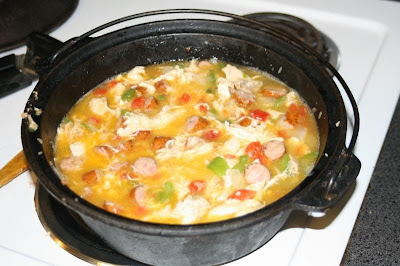 We've added the can of chicken broth and just enough water so that the rice has enough liquid to get tender.
Now, we'll put that in a 350 oven for about 30 minutes.  In the meantime we'll open another beer and go see how Milady's day went.  In a half-hour, or when the liquid is absorbed and the rice is tender, we'll pull it out of the oven. 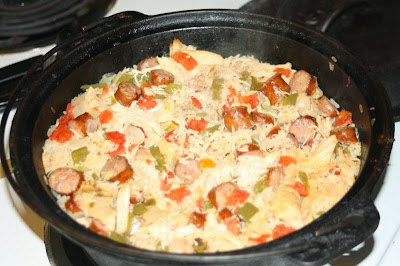 Here's what it looks like out of the oven.  Chicken and sausage jambalaya.  It's what's for supper.
Posted by Pawpaw at 5:45 PM

The only thing I would change in that recipe is to delete the Rot-El tomatoes and put in S&W diced tomatoes. Da Missus has a genetic disorder that disallows her eating anythg spicy, ANYTHING. A piece of Dentyne gum will have her in the ER as will a bite of chili that I cannot tell has any chilis in it.

On the other hand I can Dr. My bowlfuls) up with any of the several hot sauces I keep on hand or even toss in some sliced fresh jalepenos from the bush on the front porch.

I'm copying this recipe and will use it frequently. A nice rwd jambalaya sounds tempting. Do you like Hillshire Farms sausages? My other favorite is Costco's Smoked Kielbasa.