I've been looking at an old Colt revolver in the showcase at the pawn shop, and today I managed to make a deal on it.

It's a Colt, I know that for sure, and it's been chromed.  The fellow that polished it before he chromed it didn't do me any favors.  He polished the rampant Colt off the left sideplate and he polished the caliber marking off the barrel.  I'm sure that it's a six-shot, .32 caliber revolver. It's got a 3.5" barrel, and when I did the Jim March checkout on it, it seems to be tight and in good working order.

From the serial number, it's either a Pocket Positive from 1922 or a Police Positive from 1915.  I admit that I'm fairly ignorant of Colt revolvers, especially from that era, but I'm willing to learn 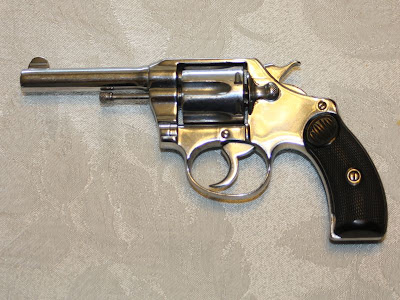 Of course, you can clicken to embiggen, and if anyone can better help me identify this revolver, that would be a big help.

Still, it's a sweet little revolver, and one that I've been looking for, for quite a while.  Milady has always said that the first pistol she ever shot was a .32, and the pistol that her Dad had was a .32 and if I ever stumbled across one, that's what she wanted.  The single-action isn't as good as my Smiths, but the double-action pull is as sweet as anything I've felt in a while.

I'll tell you this about the price.  I got it for a lot less than similar models are getting at the online houses.  And, I dealt with a local dealer and kept the money in the local economy.

You 'should' be able to narrow it down a bit more with the Colt serial numbers on line. Since I'm not on my 'normal' computer, i don't have that link handy.

No, NFO, Colt evidently numbered each model separately, starting at 1. It's one of several models, but the serial number doesn't shine much light on that subject.

Prolly a Chicago PD 32-20. Early models had "floating" firing pin fixed to hammer and no trigger actuated safety/transfer bar with corresponding notch in frame. Later models had such.
YeOldFurt

The reason that most of those old police revolvers are worn in their S/A function is because that was how they were fired back then, single action mostly, so cylinder indexing and lock-up will show more wear. If you buy it for your lady, instruct her to fire it only at full arm's length, not in any of the tactical short-range gun holds. It will be a bullet-shaver.

You may have a Police Positive Special D.A. Revolver.
It was available in 38 spl,32 &
38New Police.Came with square or round butt.If you remove grip and
see a round hole bout the size of
a quarter located under the grip screw hole in the casting,I think
that would verify.
My 2cents