In October 1965 in the comic strip Peanuts, we found Snoopy, the beagle who belonged to Charlie Brown challenging Manfred, Baron von Rictofen, to a duel over France.

Snooy, of course, was flying his Mark 1 Doghouse. 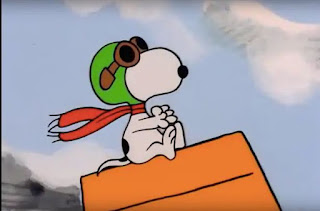 It never went well for Snoopy and he found himself in the same problem that many of the Red Baron's opponents found themselves in . 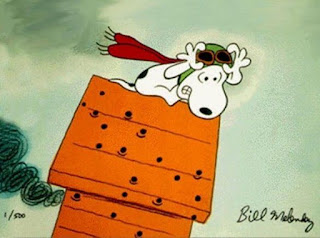 Curses!  Foiled agin.
Eventually, a singing group made a hit single about the beagle's duel.

It's Friday.  Y'all have a great weekend.  Belle and I will be traveling this weekend, and I'll catch up with y'all later.

The Name of the group is the Royal Guardsmen. There are at least three Snoopy VS the Red Baron songs There of course Snoopy and the Red Baron. Then there is the return of the Red Baron and Snoopy's Christmas. The Are videos of the Live performances on You Tube. If you watch the First song of the live performance in the 60's key an eye on the back up singer between the organist and the lead singer he acts out the song.

Yep, the running gag for a LONG time!