Back in October, I happened into my favorite pawn shop and was talking with the counter guy. I happened to spot what looked like a short-action Remington in the racks and asked to look at it. It was a Remington 700 ADL, the old plain-jane version of a rifle that Remington has produced for decades. There have been over 5 million Model 700s produced over the years. Happily, it's in .308 Winchester. That's a caliber I came late to like, but the more I shoot a good .308 the better I like it. I guess I'm just a .30 caliber kind of guy.

This one was the classic version. Blind magazine, sporter barrel, it even had a front iron sight. A Leupold VX1 scope was mounted and someone had removed the rear iron sight, but no matter. The bluing was rich, the stock looked nearly unblemished. The price was very, very right. I put it on layaway.

Early in January I got it out of layaway and brought it home. Life was busy, so I put it in the gun locker and I didn't think about it much. One day last week I took it out and rand the barrel codes through the sites that track such things and found that this particular example had been manufactured in August 1983.

I owned a Remington 700 in the early '90s and had to sell it in the later '90s. I always liked that rifle and shot it very well. 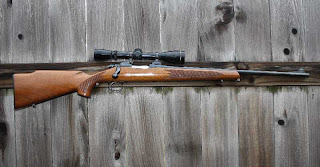 I took the stock off yesterday and found very little that needed attention. All the internals were clean, so I put a light coat of oil on them and re-installed the stock. I gave the barrel a good cleaning. I was tempted to float the barrel while I had the stock off, but I decided against it. The barrel is semi-floated. I can slide a dollar bill along the barrel channel under the barrel, but a cleaning patch won't fit. An inspection of the inletting in the stock reveals that no one tried to bed the rifle, and I may be the first person to take the stock off since it was installed at Ilion, NY in 1983.

This rifle doesn't have a recoil pad. It's got a Remington 4-screw buttplate. I normally like recoil pads on my rifles, but this stock fits me. If I install a pad, I'll have to take it to the gunsmith and have the stock cut down. I think I'll shoot it first, see how accurate it might be, then decide.

After a decade of matte-black rifles, I had forgotten how pretty a good bluing job could be.
Posted by Pawpaw at 3:13 PM

I am a Ruger 77 fan but that is a nice-looking Remgington rifle.
I also became a fan of the .308 later in my shooting life. An M1A that I shot in NRA High Power got me started on the caliber. A Ruger 77VT came along a while later and is also an accurate, capable .308.
When it came time to buy a deer rifle for my youngest son I got him a .308 too. It's a Remington 788.

700 actions are at the top of every list.
That rifle is on my gotta have list.
Gongrats.

Even so, a couple different 7xx series rifles on the used rack have called to me recently. I may yet fall prey (esp to a smaller varmint-ish caliber).

Wood and blue still appeals to me strongly even as I get more "practical" in my choice of materials and finishes.

I venture to guess that rifle's going to be a nice shooter. It isn't quite right it should respond well to a bit more attention to bedding and load development.