Common in New Orleans during the mid 1800's the gimlet knife was a favorite of gamblers, saloon girls, businessmen and politicians.  Also called the push knife, or push dagger, it was an easily concealed blade that could be employed nearly instantly.  This example has a sheath on a latigo thong, so that it can be worn around the neck, concealed beneath a shirt o waistcoat.
It is constructed of CPM 154 stainless and is razor sharp along the 2" blade.  This particular knife was crafted by FP2 Custom Knives and has a n antler handle.
The knife is employed in a closed fist, with the shank of the knife between the 3rd and 4th fingers.  It can be used in either hand. 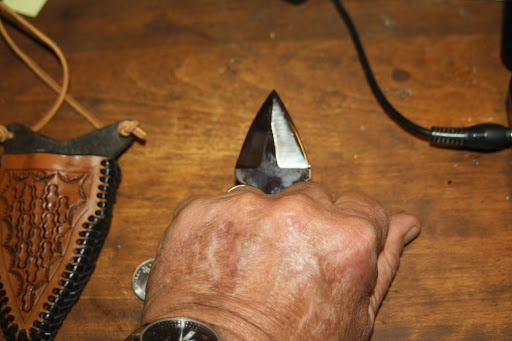 They were outlawed in New Orleans in 1879, but were common among the sporting set in other locations, and I'm sure that they never went out of style in New Orleans
It's an interesting bet of kit, and might be useful today.  I'm certain that it would open a letter or Amazon box with aplomb.
Posted by Pawpaw at 4:39 PM

Very Nice! I actually recently bought a push dagger too, to keep behind my spare mags on my duty belt. I went with the Shivworks El Nino.

Back in the early 60's while growing up in a thuggish section of a town in Ohio we kids were often beaten by thugs for sport and pleasure . My old Grandma that mostly raised me gave me an old hat pin designed to go clear through a womans hat and her hair bundled up in a bun underneath . It was a good 9 inches long . She showed me how to hide it in the seam of my bluejeans along my thigh until needed to repel bandidos . It worked quite well . Don't ever mess with an old woman . They know all kinds of tricks .

Cold Steel made a few similar designs, including a 'Nightshade' version made of a synthetic (Grivory) that did not rust or have after effects from moisture. Not only extremely lightweight but could be tucked into a sock without any after effects.

That is pretty nice leatherwork above too - Thanks for the photos of them.