I got my bullets in the mail today, the ones I ordered from RMR Reloading. Jake, the proprietor of Rocky Mountain Reloading, vouchered them as Federal Fusion bullets, which I've never seen before. Jake told me that these bullets are made by ATK, a corporation that owns several ammunition lines. They sell ammo under names that we're all familiar with, to include Federal, CCI, and Speer.

Evidently, Fusion bullets are plated rather than copped jacketed in the traditional cup-and-core process that we're familiar with.

They've got a base unlike anything that I've seen in traditional reloading components. Neither flat-based nor boattailed, they're sort of a hybrid and should act like FB bullets. 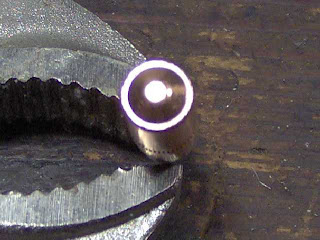 Doesn't that look odd? Still, they're good looking bullets and should work just fine in our rifles. It may be a while before I get a chance to play with them. The hunting season is in full swing around here, and the holidays are fast approaching. 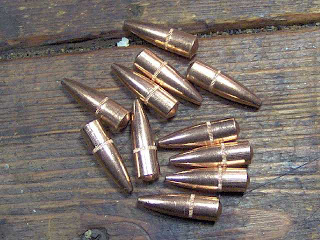 I'm sure that I can find something to use them for. .30 caliber, 150 grain bullets won't last long around here.
Posted by Pawpaw at 8:45 PM

Email ThisBlogThis!Share to TwitterShare to FacebookShare to Pinterest
Labels: reloading

Positively wierd. Like the back end was cut off a lathe after turning. I've seen a lot of bullets in the raw, but that's a first for me.

The 95-grain Fusion is the most accurate load I've ever shot out of that rifle, easily capable of sub-MOA results at 385 yards, and near-MOA at 600.

If the 30 caliber Fusions have the same results from a similar decent rifle, they should be your go-to factory ammo. Handloading, try to duplicate Federal's powder loads, since Federal seems to have it down pat.