No venison from the deer hunt yesterday, but a group of us on the lease met yesterday morning at the camp after the hunt, and we cooked a big breakfast.  Everybody brought something and we sat around the fire, jawed with each other, told lies, and cooked bacon, eggs, sausage, biscuits and gravy.  Steaming pots of coffee.  Some of those guys I see only during the season, and the camp is a great place for yarning.  I got to the lease before daylight and left after dark.  I spent the whole day in the woods.

Last year I set up a trail camera overlooking my feeder.  The use of feeders is absolutely legal in Louisiana.  The trail cameras are a way to see what type of animal is using your feeder.  I've got three mammal species using my feeder and numerous birds.  Free corn on the ground is a wonderful wildlife draw and if you like watching wildlife, a small pile of food and a trail cam will let you see species you might otherwise not normally to see.

It appears that the deer are already nocturnal in my part of north Louisiana.  I got 40 pictures of deer, and none of them were daylight shots.  There were several that might have been during legal shooting hours, but the vast majority of them were taken well after dark.  Here's one that might have been legal if I'd been there with a rifle when the picture was taken. 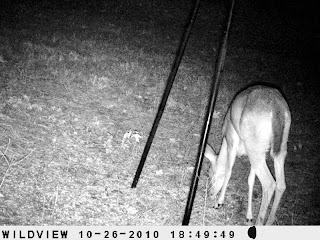 This picture was taken at 6:50 p.m., local time, which is pushing the end of legal shooting hours.  The camera has already gone to infrared mode, so the camera doesn't think there's enough light for shooting.  But, we do have daylight shots of other species using the feeder.  Like this pair of bandits, seen at 4:00 in the afternoon. 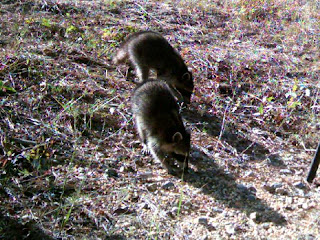 I spent the morning watching a fat fox squirrel eat corn off the ground.  Watched her though the binoculars for about an hour, she'd stuff her cheeks with corn, then run off into the woods.  Ten minutes later, she'd be back for more.

Yesterday was a very good day.
Posted by Pawpaw at 6:22 AM

Some days are better for not getting anything :-) less work, more fun sitting around chewing the fat.

The ol' general shot at a doe and missed her circa 9 this morning, and he almost left the woods in disgust. Circa 10:30 out walked two bucks. He downed one and almost shot the other one but didn't. It was a large, fat 'n' fine 4 point with a small rack. When we got home and stepped out of his truck the deer was gone from the back! We reversed trail and found it on the side of the blacktop road. He'd rounded a curve and the deer rolled out of the truck through the open tailgate. It's amazing someone didn't pick it up!