Family is in for the Easter holiday and as is our wont, I went to Momma's house to do a little informal shooting with the nieces and nephews.

I took the Howa 1500, the rifle in .270 Winchester I bought in February. I had decided to gift the rifle to my nephew, Trey. He's expressed an interest in deer hunting and is busy starting a family. Last season, I loaned him a Model 94 Winchester. After I bought the Howa, I started thinking about Trey and decided that the Howa might be a good rifle for him to own.

Howa makes a fine rifle, capable of perfectly capable accuracy. No one can argue that the .270 Winchester isn't a perfectly fine cartridge for deer hunting, indeed for most of the North American game. Factory ammo is easy to find almost anywhere.

So, this morning I took that rifle to give to Trey. We shot it enough that he's familiar with it and comfortable with the operation of a standard bolt action rifle. 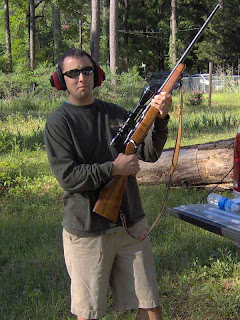 As we were finishing up the sight-in process on the Howa, a friend of another niece came out to ask if she could shoot. She's Afton, from Knoxville, TN. We talked for just a few minutes about safety and we discussed hearing protection, and I got Momma's rifle, a Cricket, for her to shoot.

The Cricket is a .22LR rifle, single shot, suitable for beginners. She and I had both agreed that she needed a smaller rifle to begin shooting. She could concentrate on safety and sight work without having to worry about the recoil of the larger rifle. 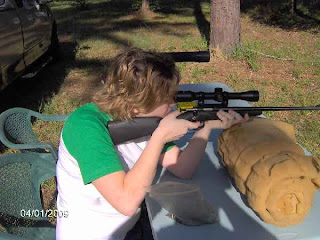 Here's Afton plinking at a 25 yard target. She seemed to enjoy herself and would probably benefit from a longer stock. Still, she's another new shooter. I hope she gets to practice when she gets back to Knoxville.
Posted by Pawpaw at 10:35 AM