This afternoon, Milady and I went down to the Alexandria Riverfront to attend the Alexandria-Pineville Tea Party. It was a beautiful afternoon, just right for being on the levee. Lots of like-minded folks joined us. 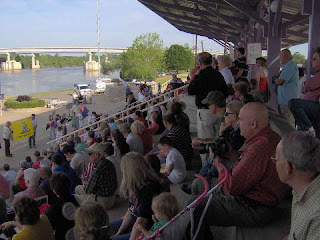 Lots of nice folks. I'd estimate the crowd at between 500 and 1000. Lots of patriotic songs and speech-ifying. It was an old-time event, set with new complaints.

Rodney Alexander (R-La, that dummy, my representative) spoke after the citizenry had their say. He'd have done better if he'd sat on the stage and listened. 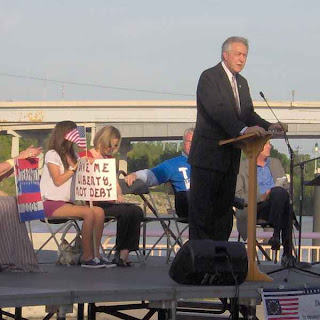 Rodney, that dummy, got up to speak and tried to defend pork. Rodney thinks that his job is to bring the pork back to his district. He even goes so far as to spell it PORC (Projects of Regional Concern), but the boos from the crowd should have told him that Pork by any other name doesn't smell so sweet.

What was sweet was to watch Rodney get booed by a crowd that was predominately Republican. Granted, this was pitched as a bipartisan event, and I didn't see any party politics at the event. But when Rodney stood to defend his porky ways, the crowd booed him. Hopefully he had an epiphany this afternoon.

The police were surprised. I heard that they had predicted that no more than 100 people would show for the event. They were wrong, but we wouldn't have needed them if the crowd was twice as big.

It was a good day to be an American.
Posted by Pawpaw at 8:22 PM

Email ThisBlogThis!Share to TwitterShare to FacebookShare to Pinterest
Labels: politics

Tea Party veterans, keep speaking out! We need to continue getting the message out! www.shirts4freedom.com

I have liked Rodney and his voting record A LOT! This kind of threw me because I would have never thought that he would be so "out of touch" with Louisianians. Please perish that thought Mr. Alexander!