It's raining here in Central Louisiana, so I have time to linger over a second cup of coffee and think about things.

I read in the news about the Israeli airstrike on a UN observer post. Four UN observers were killed in the strike and Koffi Annan is upset about it. Rightfully so. Then I found this picture at SondraK's. I don't know enough about photoshop to know if this image has been altered, but if it is legit, we might understand how an Israeli pilot might have targeted it. 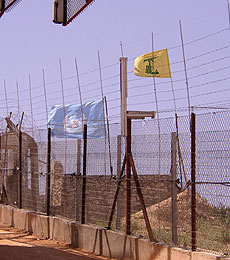 This purports to show a border observation post. From my experience, an observation post starts off with a couple of guys and a shovel. If the post overlooks something important, it gets bigger and more substantial every day. Eventually it looks like a permanent emplacement, with concrete and fences. This one shows the UN flag flying, which would tell a pilot that it is off limits. We also see a Hizbollah flag that would tell a pilot that it is a legitimate target.

Neutral observers have to take responsibility for their neutral status. They can't appear to favor either side in the conflict. To allow one side to use your facility for any reason tends to negate your neutral status and makes you a legitimate target.

Don't call the thunder unless you want to dance with lightning.
Posted by Pawpaw at 8:48 AM

I suspected something like this, and now we have the proof.

I don't think that the photo has been PhotoShopped. Look at the fiberglass flag pole that the Shizbully flag is flying from: It would be almost impossible to dub that in. Both the UN flag and the Shizbully flag have the same amount of wind-extension.

Fact is, the UN has been there for 23 years and in that time has done NOTHING about Shizbully armed birgades in South Lebanon.

BTW, I don't feel sorry for any "Americans" caught up in the conflict over there. They have shown, by their actions of summering over in Shizbully territory, that they find the terror group to be OK neighbors.

They get what they deserve.