Two of my grandchildren, both born in 2002 and living within miles of this acre, didn't see snow until they were 11, in 2013.  Here in central Louisiana, snow was a rate event for many decades.  It's still unusual enough that it it is noteworthy.

Yesterday we knew that there was a significant chance of snow.  Schools promptly announced their closings.  This is what I awoke to this morning. 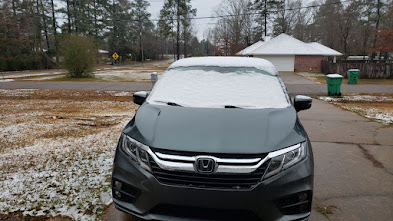 A light dusting, less than an inch.  Schools are closed, and Belle's employer text her this morning, saying hat they would open the office at noon.  Such is our response to a winter storm in Louisiana.  We don't do snow or ice in sub-tropical Louisiana.  We just don't.

Maybe, but here in the Rockies I don't worry about pickups with Louisiana license plates. Oilfield hands, and they are good drivers.

I was stationed at FT Polk. We got frantically sent home at about 3:30 one day (aprox 2014-15) BECAUSE IT WAS GOING TO SNOW TOMORROW. Not only was tomorrow’s work canceled entirely, we got sent home from work early that day. That got us to the weekend also.

I was batching it at the time so I grabbed a few sundries and a handle of Jim beam then didn’t leave my house for 3 days.

The snow didn’t worry me but the drivers did.