In the Cowboy Fast Draw community, there are two main types of timers.  Timers are important because that's where we get out scores, and basically, both timers systems work the same way.  They start a clock and stop it when the bullet hits the target.    We get a time, down to the thousandth of a second.

Quick Draw Electronics, out of Montana is one manufacturer of timing systems.  For several years, he made a timer that he called the Shooting Sports Timer II, and he still supports that timer. 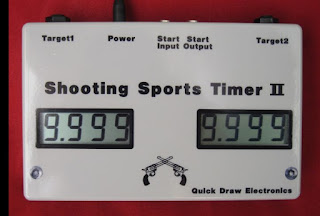 It's a great timer system, and a lot of clubs use it.  It is easily configured into a multi-timer setup that can run a standard six-lane range.  Basically, you slave one timer against another.  It works well,   The company has redesigned the system and he is in [re-production of the new system, which is causing quite a buzz in the Fast Draw community.  Simpler, cleaner, less expensive,  I hope he gets the bugs worked out, because it looks like a nice set up.

The other system of timers currently on the market is the system marketed by the association.  They call it the Gunslinger timer and it works as advertised.  You slave one timer (or a group of timers) to the master timer, and you can run a multi-lane range. 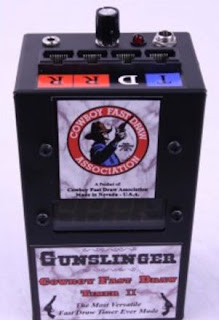 Both systems work as advertised and both systems will run a match.  They have different features, different strengths and weaknesses, and two solid camps or supporters.  The discussion around the tables at a match are not unlike the caliber discussions around a hunting camp.

When Belle and I set up the club at the church, we knew we'd need timers and spent a lot of time trying to decide which to go with.   We finally made a decision and wrote a check.  The timers should ship next week.  And, no, I'm not going to endorse one system over the other.  They both have drawbacks.  I'd really like to combine the two and make a system with no drawbacks, but electronically that doesn't seem to work.   I've tried.

We made the decision that seems to be best for our purposes, and we'll live with it.  I did put a bug in the ear of an electronics tinker-er and hopefully he'll have a great idea that will upgrade the system we chose, but we'll have to wait and see about that.

In the meantime, these two systems are the state-of-the-art in Cowboy Fast Draw systems.   As the old men used to say, "You pay your money and you take your chances."
Posted by Pawpaw at 12:00 PM