In Cowboy Fast Draw, we play a game called 5-Card Draw.  Based on the cowboy legend of playing cards in a bawdy house, it's a fun game that's played like this:

Sitting at a table, holding a hand of cards.
Your revolver on the table in front of the cards.
On the command, drop the cards and engage two targets 15 feet away.
Your time is the time you hit the second target
If you miss a target, you get a 1.5 second penalty added to your time.
Whoever has the lowest score wins.

It's a lot of fun, and there are variations to the game.  Still, it's a fun match.  Tomorrow, weather permitting, I"ll introduce the Peacekeepers to the game.

There is video of us shooting it at Thorn Valley last year.   Jump ahead to about the 5:00 minute mark to get the part of the video where we're shooting 5-card.

To that end, I've just glued some cards together.  We've found that it helps to have the cards glued, because when the gunfighters go for their revolvers, the cards are likely to get scattered. 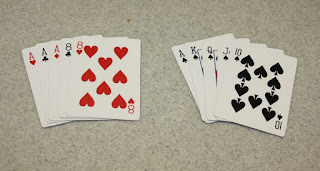 One of them is a pretty good hand.  The other, I don't know if I'd play.  If I had aces and eights, I'd probably just fold.

Better watch it, somebody will accuse you of gambling...LOL

Yeah, I'm not superstitious, but I also don't believe in pressing my luck, so I think I'd fold that full house right off the bat. And maybe leave the table for a bit, just in case!

Sounds like a neat variation of both cards and shooting - but make sure you ONLY practice it at the range!

Just wanted to pass on something I read on another forum today that might make you shootists better shots. Same guns, same ammo. Take a square of plywood and paint it white. After drying, coat the face with sugar water. Allow to dry, then prop it up at a suitable distance. Sit in the shade with your favorite beverage and shoot the flies as they land. Can use the target indefinitely with a fresh coat of sugar water.