The .45 Smith and Wesson

One of the archaic cartridges from the late 19th century is the .45 Smith and Wesson.  Also called the Schofield, it was designed to fit the Smith and Wesson #3 American revolver.    Oh, heck, I'll let Wikipedia tell you about it.

It's interesting that back in those days, different manufacturers made small changes in cartridge dimensions to satisfy legal concerns.  This time was before SAAMI, and cartridges were proprietary. Still, a look at the drawings shows us the almost minuscule  differences between the two. 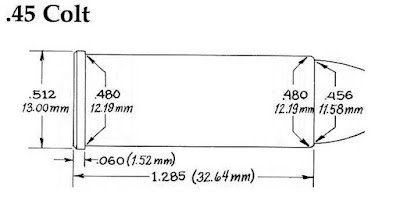 Now, the Smith and Wesson 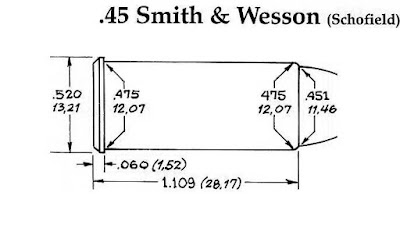 The Smith and Wesson is a fairly moribund cartridge today but the drawings still exist, and ammo is available, so we know that brass is available.

Proprietary cartridges were a problem in the late 1800s and they are a problem today.  Sometimes, contractual restrictions get in the way of real progress, so workarounds become necessary.  I realize that I'm being obtuse, but there are good reasons for that.  The question remains, though;  If we can't use .45 Colt brass, why can't we use Schofield brass?

This is a question that deserves an answer, and I'll have to look further into this.   Exit question:  Who besides Starline makes brass in the US and might be amenable to a fairly large custom order?

I'm going to leave this right here so that I can find it later.
Posted by Pawpaw at 12:00 PM