A Tale of Two Pistols

Milady and I started playing this Cowboy Fast Draw game in March, and quickly geared up with holsters, Ruger Vaqueros, bags, ammo, and targets.  After watching the grandkids enjoy playing the game, we decided that it might be nice to have another revolver, a loaner, a spare, so that we could keep our revolvers in our holster while we are on the line.  So, I started casting about for a suitable third revolver.

A. Uberti makes a creditable copy of the old Colt 1873 Peacemaker revolver, and when we were in Texas at the Texas State Championships, we noticed that the line was just about split on Vaqueros and Ubertis.  Some quick checking revealed that the Uberti is about $100 less expensive than the Ruger, and that made my choice a bit easier.

Yesterday, reading the Sunday paper, Milady noticed a sale at a place called The Spotted Dog, just north of our house, about an hour away.  She bade me call them this morning, and they told me that they had a selection of Ubertis, so we got in the car and headed north.  Before long, we were at the store, and looking at revolvers.  We found one we liked, and it turns out it was made by Unerti for Stoeger.  Called the Cattleman Mellinium OT, it has a matte finished barrel and receiver and a brass grip frame and trigger guard.  A quick look at the Uberti site tells me that this is the same revolver that Uberti markets as the Hombre.  The Hombre is Uberti's lowest-priced revolver.  The matte finish is easiest to achieve, but inside it's all Colt-clone.  So, we wrapped it up and brought it home with us.

While I was driving, Milady took it out of the box and started exploring it.  She believes that the grip frame is just a bit trimmer than the Ruger.  Truth be told, Milady has small hands, and I had to modify the Ruger grips so that she could use it.  She also noticed that the hammer seems to cock easier on te Uberti (and I had modified her Ruger by cutting four coils off the mainspring).  She also likes that te ejector rod isn't centered in the Uberti.  The Ruger centers the ejector in the chamber, and the shotgun primers of the CFDA loads drop out.  The Ruger ejector comes through the hole left by the primer, making ejection sometimes problematic.  She also thought that the Uberti felt a couple of ounces lighter than the Ruger.

So, when we got home, I put the Uberti on the old family scale I keep in the shop. 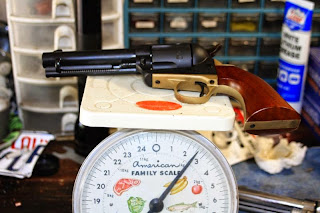 The Uberti weighs in at 2 lbs, 9 ounces on my old scale. 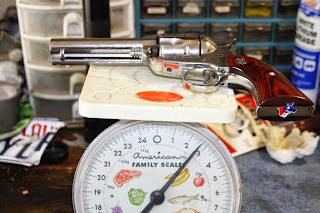 The Ruger weighs in at 2 lbs, 11 oz.  Not enough for me to tell the difference, but Milady's calibrated hands felt the difference in those two ounces.

Still, on the way home, I heard this come from her mouth.  Guys with women that shoot know this conversation.

Milady looked at me from the passenger seat.  "I think it's pretty.  I can't wait to shoot it." 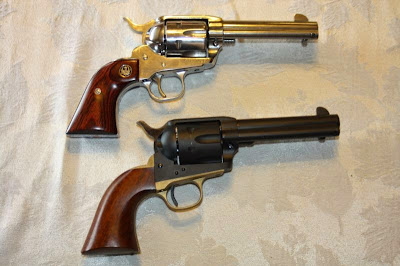 Either way, it's nice to have another revolver in the bag.  We'll provide a more thorough review as time goes along.
Posted by Pawpaw at 3:35 PM

Around here the "conversation" goes," If this is in the house I'd better know how to shot it." "sure" Range trip, "Wow, this is nice, Thanks." Last I see of it.

Ah yes, might as well get in the habit of buying two at a time...LOL