Last year, just before Christmas, I got a call from my favorite gun store.  An anonymous donor had bought me a gift certificate, and I needed to come in an pick it up.  What a deal.  (I've since learned who the donor was, and I've thanked them profusely.)  When I went in to pick up the gift certificate, I happened to look down in the case, and saw a Ruger Super Blackhawk that had recently come off pawn. At a very attractive price.  I immediately put the Ruger on layaway and picked it up a couple of days later. 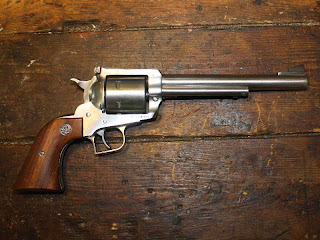 What can you say about a .44 magnum revolver that hasn't already been said?  It's a big honking revolver with a 7.5 inch barrel and it shoots a big ole bullet.  Personally, I use just one bullet in this revolver.  Lee's 240 grain tumble lube, semi-wadcutter.  They cast out at 0.430 from my wheelweights and I use them in both specials and magnums.

Of course, I immediately had to dig through the books and work up some magnum loads.  I settled on 19.0 grains of  2400 powder and that big semi-wadcutter and I found that I could drive them to about 1350 fps.  Recoil was interesting, but the load is accurate.  Then I started digging around for a suitable .44 special load and stumbled across a load that Skeeter Skelton recommended.  7.5 grains of Unique under that same bullet.  Skeeter's load chronographed at 970 fps with great accuracy. 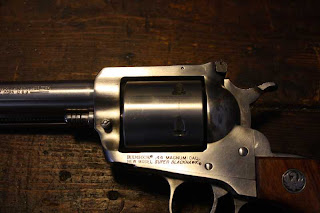 Today, I ordered a holster from Midway USA.  An Uncle Mike's Sidekick holster.  Nothing fancy, just a good solid carrying holster.  There's no danger of my trying to conceal this particular revolver, so an outside-the-pants holster will do fine.  I've got plenty of Skeeter's load ready for the woods.

I believe that with just three loads, this revolver will do anything I ask it to do.  I've got the big magnums in case I ever decide to tackle something heavy.  Or if the nephews want to try their hands at recoil.  I've got Skeeter's load for about 95 percent of the handgun tasks I might ask of this revolver.  And I'm going to load some of Junior's shot cartridges for snake duty when we're cruising the early fall woods.

That holster should be in the mailbox next week.  I think that this is the revolver I'll use as a 4-wheeler gun this winter.  It ought to do just fine.
Posted by Pawpaw at 5:44 PM

VERY nice! :-) Now you 'could' conceal it if you wore baggy pants, a shirt down to your butt, etc... LOL

I have .357 Ruger revolver and I have buy Galco leather holster for it. It is beautiful holster and very comfortable with wear.