On a beautiful Tuesday morning, Belle and I left the house to go plunder around.  More on that later.  Now that we're home, it's time to look at the numbers.

My home parish, Rapides is listing 504 cases, up five from yesterday.  They've also included another death, not the count is at 16.

Belle has been thinking about a new ride.  Her's is okay, but she has plans to give it to a grandchild, and a family member had been talking about her new ride, a Nissan Murano.  So, this morning we drove across the river to the local Nissan dealership.  One thing led to another and Belle bought a new Murano. 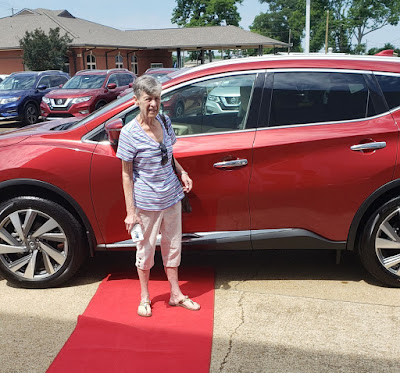 They call that color Cayenne Red, ad because Belle likes cayenne peppers it seemed like a good omen.  If you're thinking about a new ride, now's the time to do it.  The dealers are interested in dealing, and some of the incentives are very attractive.  Her old ride is a 2015, and I'm impressed with how the technology has evolved in the past five years.  This thing has more bells and whistles than a steam locomotive.  It has lots of new safety features, like automatic braking and intelligent cruise control.

When we got home with it, we figured out how to make the garage opener operate  I'll leave her to figure out the other little doo-dahs.
Posted by Pawpaw at 2:00 PM

Email ThisBlogThis!Share to TwitterShare to FacebookShare to Pinterest
Labels: COVID-19