I have to launch some grandchildren in another year or so, and one of my missions is to teach them the basics of puttering around the kitchen,  Earlier today I had stopped at the grocers and picked up some french bread and a small pack of pepperoni.  When Quinton got home from school this afternoon, he met me in the shop and we made an after-school snack.

Slice that french bread length-ways and slather on some good garlic butter, then run it under the broiler to toast.  After it toasted, drag it out, add some leftover spaghetti sauce, some pepperoni and grated cheese that we always keep on hand.  Back in the broiler until the cheese melts and everything looks toasty. 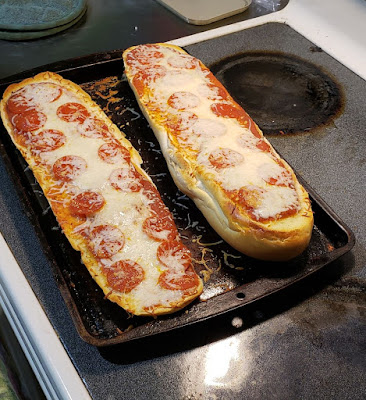 I don't know what you call it, but it's good.  He ate half, and put the rest back for later.  And, we have another loaf of bread if we get peckish later on.
Posted by Pawpaw at 4:37 PM